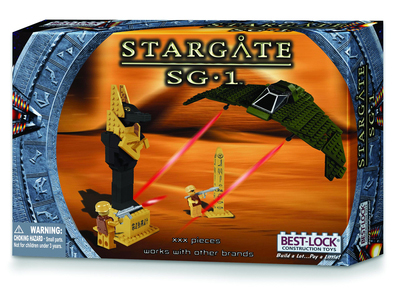 From the packaging the sets appear to be officially licensed by MGM. The larger “Earth” set retails at $39.99 (Canadian), with the smaller Daedalus and Death Glider sets going for $19.99.

The sets are recommended for kids (and grown-ups!) ages 5 and up.

So far they’ve only turned up in Canada, and only online. If anyone spots these in a store or outside Canada, let us know!

(Via Topless Robot. Thanks to Andrew for the tip!)

I hope they come with ickle SG-1 personel!

God, I miss Stargate so much.. So regrettable that SGU was cancelled. Ever since SGU Season 2 was done, I have been doing re-watches continually of all three shows to prevent withdrawal, but ah.. It can only ease the suffering for so long, eventually the cravings will be too much!

I’ve wanted Lego to do Stargte for so long, if only Lego did these

I have posted a question on the Sears website for the SG-1 Earth set asking if it comes with SG-1 Personnel. I will advise on receiving an answer.

I don’t believe it, Stargate LEGO! (Or equivalent.) How incredibly cool is that?! I wonder if it will ever arrive across here in the UK and the rest of Europe?

Nice! I think I will get these if they ship to UK

Aw, How come no Prometheus?

they might be in other stores other than Family dollar in the US also.. quote from Best-lock “We have also sold these sets to our US Distributor so they will also be selling these sets to their customer base so keep a check on any other toys stores to see if they start to pop up soon.”

Awe, the 304 looked better in the Sears picture. Now I’m feeling a little less likely to buy it. I was excited about that one, too…

The stargate best lock sets are starting to appear on ebay:
http://www.ebay.com/itm/Stargate-SG-1-Jaffa-Outpost-Best-Lock-Lego-Compatible-with-2-Jaffa-mini-figure-/230886685633?pt=Building_Toys_US&hash=item35c1eb3bc1
http://www.ebay.com/itm/Stargate-SG-1-F-3021-with-Col-Jack-Oneil-Figure-Best-Lock-Lego-Compatible-/230886664434?pt=Building_Toys_US&hash=item35c1eae8f2
I haven’t found them at the Family Dollars yet

F302 set and death glider with stargate set are in family dollar for $10 each.