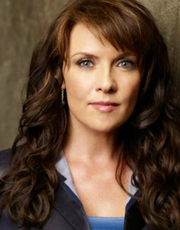 Stargate and Sanctuary veteran Amanda Tapping is adding another genre favorite to her resume as “Queen of Sci-Fi.” She’ll appear in a major recurring role in the eighth season of Supernatural, according to TV Line.

Tapping will play Naomi, described by showrunner Jeremy Carver as “cool and mysterious, part of a new group of angels we’ve never seen before.”  Naomi’s demeanor is efficient and put-together, but this only hides a lot more going on under the surface.

She’ll make her first appearance in the seventh episode of Season Eight, titled “A Little Slice of Kevin.”

The “Samantha Carter” actress recently had a directing stint helming three episodes of the upcoming fantasy series Primeval: New World, and appeared on screen in the Lifetime move Taken Back: Finding Haley, which aired in August.

Season Eight of Supernatural premieres Wednesday, October 3 at 9/8c on The CW in the United States. Look for Amanda’s first appearance sometime in November.

Radical. ;) I’ve seen the show here and there, so I’m very much looking forward to what she gives us. :D

The only bad part of this news is that they have only started showing season 7 here (Ireland)… maybe this time next year before we see that episode.

Supernatural will be very hard to understand if you haven’t watched the 150 episodes prior to season 8. But I can’t imagine any sci-fi fan not finding it well worth their time. It’s on Netflix streaming, or two episodes per day on TNT (which should start back on season 1 in about a month). I never thought I’d love any show more than SG1, but SPN has totally surpassed it.

Unfortunately, I am *not* a fan of Amanda Tapping. I hope she doesn’t make my fave show too annoying to watch. :-(

I have a question for gamoses. How do you love SG1, but not be a fan of Amanda Tapping? It is hard for me to imagine SG1 without Captain/Major/Colonel Carter. Please believe that my question is not meant as criticism in any way; I am just so very curious.

I just think this is terrific that our SG actors are getting more exposure! Supernatural is a genre favorite and I’m happy to see Amanda get to play a part. Here’s to the rest of them also getting juicy roles in the future!

lol, Truman7, that’s a fair question. Why do certain people rub you the wrong way? I don’t know, they just do. I find Tapping annoying, but I guess I’m the only one who does. Besides, SG1 is only about Jack and Daniel, isn’t it? ;-)

Haha, I see what you did there. Carter will have a major recurring role. Carter. Major.

Amanda is truly a queen of SciFi.

Hopefully, this means Season 8 will make the show better. Because, frankly, Season 7 was not one of the best seasons. It might have been the worst, actually. Not a bad season, though … just an “average” season.

I’ve never seen a single episode of Supernatural. Guess I’ll have to hope my Son can get me up to speed. Exfinity has a few episodes from season 5. Hmmm…

Makes sense, gamoses, as I reflect upon some people who rubbed me the wrong way with no particular reason why they should do so. And yes, SG1 is Jack and Daniel; the other characters on the team could have been different, but remove J & D and (for me) there would be no SG1. However, I did enjoy the Samantha Carter character, especially during interactions with her father and the Tok’ra.

I found season 6 very enjoyable and Daniel wasn’t there and I know there were some people who actually enjoyed seasons 9 and 10 without Jack. It seems to me that neither character was completely indispensable and neither was the relationship between the two. I only watched after Jack left because Sam was still there. So to fans like me, Sam was irreplaceable on SG-1. It just depends on the fan.

Supernatural is a wonderful show, especially for the theological and mythological history incorporated into the shows theme. Very much in the vein of Stargate did with the Egyptian mythology. Not to mention Supernatural has a cool witty-sense of humor between characters, and the classic rock soundtrack is awesome too.

How do you figure it’s a sacrilegious show?

ganthetjr – I kind of see where Coremae is coming from. It’s not a proper representation of angels and demons and pretty much everything else that would be defined as part of the Christian religion. But I say, who cares? This is a fantasy show. It’s not real. And besides, there are also vampires and werewolves, shapeshifters and demigods … there’s a variety of creatures on this show that don’t really exist in real life, so why complain when there might be something real that isn’t exactly portrayed the way you want? Also, if you don’t like it, don’t watch… Read more »

Very nice, thanks for that information!
A former Stargate and now SPN faN!!

Ah yeah did you know in season 3 Don S. Davis and in Season 5 Michael Shanks appeared for 1 episode both. Its kinda interesting. If now Christopher Judge and Richard Dean Anderson appear the whole team appeared ^^

Oh, and Jewel Staite (Dr. Jennifer Keller from “Atlantis”) guest starred in one episode in Season 7.

Wow, what show isn’t Amanda a part of!? I hope she has a great time being part of Supernatural.