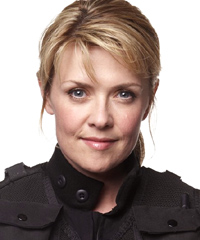 SG-1's science expert and theoretical astrophysicist, Samantha Carter was responsible for deciphering the Stargate address system and designing the dialing computer, allowing Earth to use the Stargate without its companion D.H.D. Brave, devoted and extremely intelligent, she is Earth's leading authority on the Stargate and wormhole theory, as well as a member of the Air Force.

Carter graduated at the top of her class from the U.S. Air Force Academy. As a pilot, she logged over 100 hours in enemy air space during the Persian Gulf War. She spent two years at the Pentagon trying to make the Stargate program a reality from about 1994 to 1996, before Dr. Daniel Jackson ever deciphered the Stargate and allowed the gate to be activated.

When Sam was young, her mother died in a car accident, which almost drove her and her brother from their father, Jacob -- who was indirectly responsible for her mother's death. Sam eventually forgave him, and followed the general's footsteps and joined the Air Force. When the Stargate program was created a year after the first mission to Abydos, Sam was reassigned to the S.G.C. and made Colonel Jack O'Neill's second-in-command on SG-1.

Sam learns of her mother's death. From "Jolinar's Memories."

Sam is kind and loyal, especially to the members of her team, whom she has defended in countless battles against enemies both foreign and intergalactic. She is probably the highest-ranking female officer in the S.G.C. (She currently holds the rank of colonel.) The Stargate program has become her life's work, and she spends much of her free time at work on projects at the S.G.C., or writing a book on wormhole physics.

After SG-1 found the entire population of the planet Hanka wiped out by Nirrti, save for a young girl named Cassandra, Sam befriended her. Dr. Janet Fraiser adopted the girl, and the three of them have formed a special bond. Carter stayed by Cassie's side even as her life was hanging in the balance, even at great risk to herself.

Carter is possessed by the Tok'ra Jolinar. From "In the Line of Duty."

During a Goa'uld raid on the planet Nassya, Carter, giving mouth-to-mouth resuscitation to a native man, unintentionally became host to a Tok'ra symbiote: Jolinar of Malkshur. The Tok'ra was fleeing from a Goa'uld Ashrak (a hunter-killer), who followed the team back to Earth and eventually caught up with Jolinar. The symbiote gave her life for Sam, dying in her body. Sam was changed forever: the symbiote left behind a protein marker, as well as traces of naquadah in her bloodstream. Because of this, Carter is now capable of operating Goa'uld technology, including the hand devices and healing devices. She also retained many of Jolinar's memories, which have become a strategic asset on several occasions.

Sam has been possessed by an alien entity, brought back from the dead by the Nox, sold into slavery, met herself from an alternate reality, saved Earth from an alien incursion, thwarted a Replicator attack on the Asgard, blown up a sun to destroy Apophis's fleet, nearly destroyed the peaceful planet K'Tau, been kidnapped and nearly dissected, commanded SG-1 in O'Neill's absence, and flown in an interstellar race.

Sam is reunited with her father, Jacob. From "Secrets."

In her time with the Stargate program she has also had several unresolved romances, including a special intimacy with the Tok'ra Martouf / Lantash, once Jolinar's mate. She also became involved with the Tollan Narim, an ascended being named Orlin, and Earth ambassador Joe Faxon. Sam herself has strong feelings for Colonel Jack O'Neill, though military regulations prohibit the two from developing a personal relationship. Unfortunately, the men interested in Sam have a tendency to ... die.

Carter immediately bonded with Daniel Jackson, due in large part to their shared scientific focus and moral concerns. Sam's scientific and Daniel's diplomatic training complement each other, and have won SG-1 many victories. Sam also shares a close friendship with Teal'c, who has been her comforter during difficult situations. Both are true warriors.

Sam also remains close with her father Jacob, a retired Air Force general whom she helped to save from lymphoma cancer through the introduction of the Tok'ra symbiote, Selmak. Since Jacob joined the Tok'ra, his relationship with his daughter has greatly improved. Sam also has a brother, Mark, who lives in San Diego and has two children, and until recently was estranged from their family.

Jonas helps Carter find a way to save Earth. From "Redemption, Part 2."

Because of the deep friendships and loyalty she has built with the rest of the team, Carter took the death of Daniel Jackson extremely hard. At first she somewhat resented his replacement, Jonas Quinn, but eventually learned to trust and admire the Kelownan, encouraging him to remain with SG-1 and use his particular abilities to help the team in their fight against the Goa'uld.

Carter has grown into a key leadership role at the S.G.C., just as well as she executes the orders of her superiors. She has single-handedly conceived of plans that saved the planet, vanquished enemies and defeated Goa'uld powers. But during her off-hours, Carter prefers working on her motorcycle more than taking up O'Neill's offers to go fishing and, every other weekend, will spend the day with Cassandra over a game of chess.

When O'Neill took reassignment and SG-1 disbanded, Sam worked for a few months in research and development at Area 51. But the threat of the Ori soon brought her back to Stargate Command, where she effectively shared command of SG-1 with Cameron Mitchell. Two years later she entered a very new stage in her personal and professional life when she took command of the Atlantis expedition in the Pegasus Galaxy, saying goodbye to SG-1 and Earth. She served there for one year before being reassigned, eventually taking command of Earth's newest battle cruiser, the U.S.S. George Hammond.