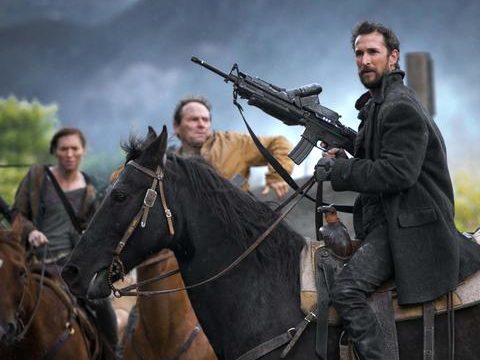 The new season of TNT’s alien invasion series is on its way, and today the U.S. cable network announced the show’s premiere date.

Season Three of Falling Skies will have a 2-hour premiere on Sunday, June 9 (9/8c). The following week it will move to its regular time slot at 10/9c.

Falling Skies follows Tom Mason (Noah Wyle, ER) and the 2nd Mass, a group of resistance fighters and civilians who are fighting against a devastating alien invasion of Earth. Season Two concluded with a big victory against the invaders and the shocking arrival of a new player on the scene — a previously unseen, advanced alien race that may be an enemy of the hostile invaders.

The series co-stars familiar Stargate faces Colin Cunningham (SG-1‘s Major Paul Davis) and Ryan Robbins (Atlantis‘s Ladon Radim). Cunningham plays John Pope, head of a gang of thugs that have aligned themselves with the 2nd Mass — but who can never quite be trusted. Robbins joined the show last year as Tector, one of Pope’s “Berserkers” who revealed that he was once a U.S. Gunnery Sergeant, but who blames himself for losing his unit in an ambush.

The list of executive producers also includes Remi Aubuchon, who wrote for the second season of Stargate Universe.

Season Three will feature guest stars including Gloria Reuben, Wyle’s former ER co-star, who plays Mason’s aide Marina Perlata in a multi-episode arc. Also watch for House‘s Robert Sean Leonard, who will play an obsessive but gifted scientist who runs the local power grid and lives underground with his pet rats, earning him the nickname “The Rat King,” according to the network.

If you’ve never watched Falling Skies, June 9 is a great time to check it out! Follow the show on our sister site, SciFiStream.com. Catch up on the story with the video below.

I really hope the new aliens are friendly. The 2nd Mass and the rest of humanity could really use a break.

Good – With The Walking Dead season over there is something to look forward to (though not nearly as engrossing).

Awsome show! I cant watch it on tv tho seeing as how I don’t have cable, but im watching all of them online. also just wanted to point out id much rather you guys bring stargate back

a bad ass idea for a tv series for yall to think of, kinda starts out just like any alian invasion movie like falling sky,the aliens come kick humanitys ass but then vampires show them selves to the world and take the frunt lines in the fight and start kicking ass not being able to die and all XD

This is one of the best science fiction programs running. I still love it. It keeps getting better and better.

Does anyone know if Season 4 will get the greenight?