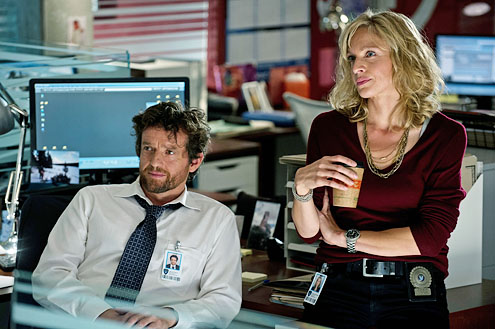 The new series from Canada’s CTV puts a new spin on the police procedural formula by revealing the identity of the killer to the audience at the beginning of the show, and then following the detectives as they seek to learn why the crime was perpetrated.

Motive stars Kristin Lehman as Detective Angela Flynn. Ferreira co-stars as her trusted partner, Detective Oscar Vega. Other familiar faces from the Vancouver scene also appear, including Cameron Bright (Stargate‘s younger reincarnation of Orlin in SG-1‘s “The Fourth Horseman”) and Roger Cross (who appeared in a few early-season episodes of SG-1, and more recently has been a fixture on Continuum).

In Canada the show was the highest-rated new series premiere of the 2012-2013 season. The first season is comprised of 13 episodes.

Motive premieres tonight at 10/9c before moving to its regular time slot this Thursday (9/8c). It airs as a summer series in the U.S., and in Canada has already been picked up for a second season on CTV.

(Thanks to Shenandoah for the tip!

I think you’ll find that Columbo used the same format as described above! In fact, looking at the above pic, if Louis put on his trademark brown coat, he would be the spitting image!

Roger Cross has also been appearing now and then on The CW’s “Arrow”, as a cop.

He was very good in his appearance in Breaking bad played the character well.