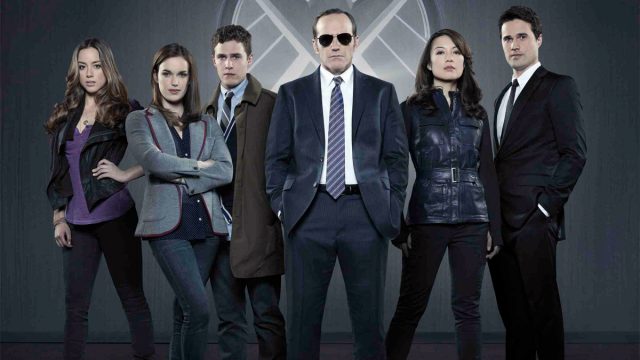 Ming-Na Wen is Melinda May!

ABC has just announced its official pick-up of the highly anticipated Marvel’s Agents of S.H.I.E.L.D., set in the Marvel cinematic universe and developed by Joss Whedon (Firefly).

The series will co-star the former SGU actress, who played Camille Wray for two years on the Syfy Channel series.  Wen plays Agent Melinda May, a pilot and martial artist who works for the peace-keeping force S.H.I.E.L.D. (Strategic Homeland Intervention, Enforcement and Logistics Division).

Click on the image for a closer look at the new team.

Set in the same universe as the Iron Man, Avengers, Hulk, Thor, and Captain America feature films, the television show will follow the heroic exploits of the non-superpowered agents who must keep the world safe when the marquee heroes are not around.

Says the show’s description (via Deadline):

Clark Gregg reprises his role of Agent Phil Coulson from Marvel’s feature films as he assembles a small, highly select group of Agents from the worldwide law-enforcement organization known as S.H.I.E.L.D. Together they investigate the new, the strange, and the unknown across the globe, protecting the ordinary from the extraordinary. Coulson’s team consists of Agent Grant Ward (Brett Dalton), highly trained in combat and espionage, Agent Melinda May (Ming-Na Wen) expert pilot and martial artist, Agent Leo Fitz (Iain De Caestecker); brilliant engineer and Agent Jemma Simmons (Elizabeth Henstridge) genius bio-chemist. Joining them on their journey into mystery is new recruit and computer hacker Skye (Chloe Bennet).

Whedon directed the pilot and will executive produce the show, along with long-time collaborators Jed Whedon and Maurissa Tancharoen.

The first peek at the new series will air during Sunday’s season finale of Once Upon A Time (8/7c) — which, coincidentally, stars Ming-Na’s former Stargate Universe co-star Robert Carlyle (“Nicholas Rush”).

We’ll have a date and time for S.H.I.E.L.D. when ABC announces its full fall schedule next Tuesday.

[…] version of this story originally appeared at GateWorld.net) Tags: ABC, […]

@Jim, Whedon has stated the TV show takes place after the Avengers move.

Yep, if you note the beginning of the trailer (before Coulson enters), his death “before the Battle of New York” is mentioned. That’s the climactic battle from The Avengers.

Don’t care for it no real acting.

I love the Avengers and I personally can’t wait for this show to come out I’m really interested about how Agent Coulson survived.