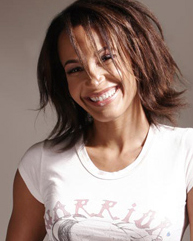 Stargate Atlantis veteran Rachel Luttrell will be back gracing your TV screen later this year.  The actress announced via Twitter that she will make a guest appearance on NCIS: Los Angeles.

She played the Athosian warrior Teyla Emmagan for five seasons on Stargate Atlantis.

No word on her NCIS character or when the episode will air just yet, but since it begins filming this week, odds are that it will turn up around November.

In the meantime, see what Rachel has been doing lately! Her short film “Zarg Attack!”, with Connor Trinneer (“Michael”), is below. At just shy of 4 minutes, it also stars her young son, Caden Dar (born during the filming of Atlantis).

Tayla was definitely one of the worst characters in the SG franchise, painfully boring and uninteresting, SGA could have been so much better without her.

You’re kidding right? Tayla was awesome. She was what she was suppose to be.

Loved Rachel as Teyla!! Happy to see her again on the TV screen! She was already on NCIS a year or so ago, perhaps same character?

Sorry ofer, but you’re wrong. Tayla was an excellent character and was extremely well acted by Rachel. I so miss SGA and it kills me not know what happened to Atlantis. Did they get back to pegasus in the end?

Also does anybody else find it frightening how old Rachel’s son is now given she had him while filming Atlantis? Time flies huh? :)

I agree with Ofer. Teyla started as an interesting character, then episode after episode as SGA turned out to be the Shepard and McKay show, she became a background character.

Without a doubt, she was the worst character in the history of the franchise.

@skittles, I beg to differ. That honor belongs to Keller. (if not Lucius Lavin)

Teyla is one of my absolute favorite characters and I adore Rachel. She is an amazing actress and I look forward to her being back on TV if only for a guest role.

I also found her to be the most annoying character on Atlantis (2nd only to Ming-Na on SGU).

Great character – Underutilized in my opinion. She is a multitalented entertainer.

I really don’t get you guys, Tayla was just standing there, never saying or doing anything interesting, she didn’t seem to have chemistry with anyone, if you could go back and film the entire show without here it would look basically the same.
@Sylvia, I couldn’t stand Lucius Lavin either, he was obnoxious and super-annoying, thankfully he was only in 2 episodes so I can pretend he never existed.

First, her name is spelled T-e-y-l-a. It’s in the article. And what I don’t get is the hate. Teyla Emmagan was and is an amazing character with so much potential. Rachel did a wonderful job with what she was given, but you can’t blame the actress for lack of screen time and focus.

The characters that annoyed me were Elizabeth Weir and Keller, but I wouldn’t go bashing them in an article about something else good for one of those actresses.

I truly loved Rachel’s portrayal of Teyla, and I think she will be great on NCIS. GO Rachel!!!

TeylaFan: How her name is spelled is not the point–no matter how you spell it, she’s a terrible actor in many people’s eyes and her character was lame and dragged down the show.