For other uses of this name, see Michael (disambiguation) 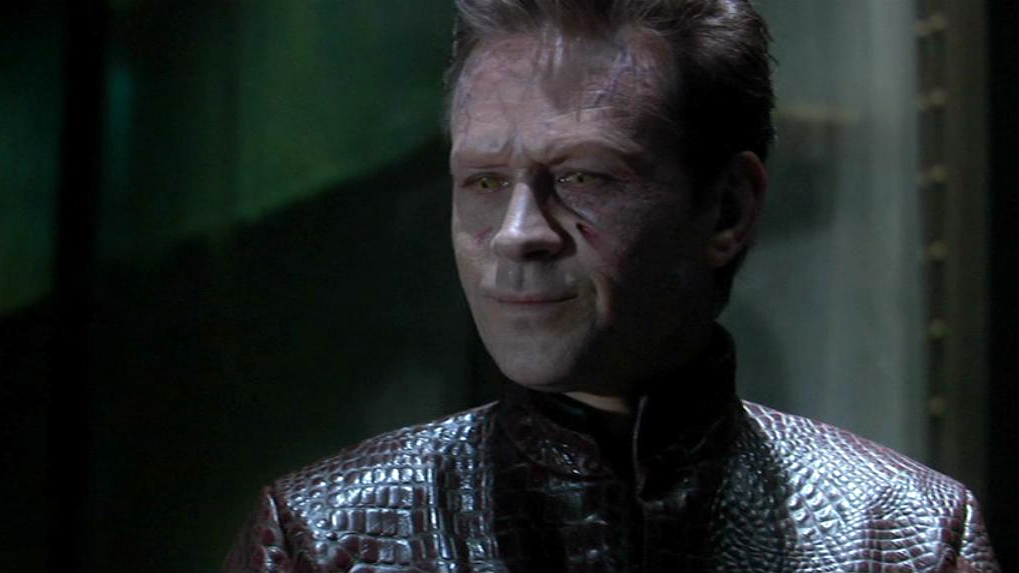 Name given to a captured Wraith commander. The first name, "Mike," was suggested by John Sheppard. "Kenmore" was likely given by Dr. Carson Beckett, after a town in the Highlands of Scotland (posted that month on his office calendar). Michael was captured for the specific intention of testing Dr. Beckett's prototype iratus bug retrovirus.

Michael awoke in a private medical bay in Atlantis with no knowledge of who he was, but he was told he had recently arrived in Atlantis and had been captured by the Wraith. Until the expedition was confident that the Wraith had done nothing to alter his personality he would be monitored by guards and be forced to take his insulin injections for his type one diabetes in the infirmary.

Michael learned from Teyla Emmagan that the two had been friends. She showed him to his quarters where she explained he was from Texas, and eventually he grew comfortable enough with her to begin sparring together as part of his physical fitness. It became apparent very quickly that Ronon Dex had issues with him, and in his counseling sessions Dr. Heightmeyer convinced him he would come around in his own time.

When Wraith nightmares would not leave him be he asked Dr. Beckett to prescribe sleeping pills. When those did not work he returned to the infirmary, where he discovered discs detailing his condition before his memory blackout. Playing the CDs in the computer in his quarters, he learned very quickly that he was originally a Wraith.

Infuriated, Elizabeth Weir explained that she authorized the tests for the retrovirus, but Michael only began to believe that humans were no better than his original race. He was moved to the Pegasus Alpha Site where Dr. Beckett hoped to enhance his retrovirus dosage to eliminate Wraith cravings, but Michael probed Teyla's mind and escaped the facility with her before further tests could be run.

Michael took Teyla to another world, likely inside Wraith territory, where he began to revert to his Wraith self. Before he could feed on her he was shot in the back by Colonel Sheppard. Wraith from a landed cruiser soon arrived to collect him.

Weeks later Michael gained control of a Wraith hive ship and convinced the queen to travel to Atlantis and propose a deal to Weir: in exchange for Dr. Beckett's iratus retrovirus, Michael's hive would begin to use it on other Wraith -- and feed off of them instead of human settlements. Michael's reunion with Teyla and Ronon was not pleasant, but he made it clear to Teyla that he did not wish her dead.

When it became clear that the Queen and the other Wraith regarded Michael as an unclean outsider, he turned on them and helped Sheppard free his captured friends and stop the hive ship from reaching Earth. But Michael was given the retrovirus again, and lost his memories. It did not take him long to once again remember who and what he was -- but he was left marooned on a planet.

Another hive ship picked him up, but Michael was still an outcast among his kind. He struck out on his own, finding the new Taranian settlement -- among other planets -- and using the humans there as subjects in a series of experiments. Using the iratus bugs, Michael engineered his own army of giant, insect-like creatures to do his bidding. From this crude start he has developed an army of Wraith-human hybrids, who will do his bidding and, one day he hopes, replace the Wraith as a dominant species in the Pegasus Galaxy.

Michael - Michael Kenmore, a young solider from Texas, wakes in an Atlantis infirmary with no idea who he is. For Beckett and Weir, the experiment is about to begin.
Allies - Michael returns aboard a Wraith hive ship with a proposition to Atlantis, to hand over the iratus retrovirus or have the existence of the city revealed to the entire Wraith collective.
No Man's Land - Rejected by his own kind as a freak, Michael helps Colonel Sheppard and his team take out the Wraith and capture his hive ship.
Misbegotten - Michael is transformed back into a human with the retrovirus -- against his will -- but suspects that all is not as it appears when he and the other humanized Wraith are resettled.
Vengeance - When Sheppard's team discovers the facility where he is creating a race of insect-like warriors, Michael captures Teyla and later escapes with his new army.
The Kindred, Part 1 - Michael arranges to kidnap Teyla, revealing that he is the one who abducted her people, that he no longer needs to feed like other Wraith, and showing off his new army of Wraith-human hybrids.
The Kindred, Part 2 - Intent on using her unborn child in his genetic project, Michael avoids the rescue team from Atlantis and takes Teyla to another planet.
The Last Man - When Sheppard is sent into the future, McKay reveals a future that went terribly wrong when Michael rapidly defeated the Wraith and took over the galaxy.
Search and Rescue - Sheppard's team infiltrates Michael's hive to rescue Teyla and her newborn son, and Michael is believed to be killed after the Daedalus destroys the ship.
The Prodigal - Having stolen a Puddle Jumper, Michael and a team of hybrids infiltrate Atlantis to capture Teyla's son and destroy the city. But when he refuses to leave without achieving both goals, the team turns the tables on him and Michael is killed.