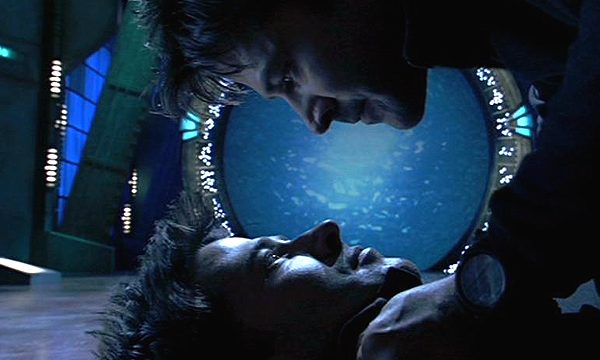 During an off-world mission Colonel Sheppard unknowingly becomes host to an alien entity, which infects others in Atlantis and afflicts them with terrifying nightmares.

Rewatch “Doppelganger” this week! Then post your comments below, or head over to the “Doppelganger” discussion forum and see what people were saying back in the day. What are your favorite moments?

Check out my article celebrating the franchise’s 20th anniversary by examining 10 of the best episodes:

I thought this was a fun little episode. Being a ex-EMT I laughed at how quickly they recovered from the “shock”,but I know time will not allow for a proper recovery in an 1hr long episode.
I was sad to see, “Kate” go. She was a good actress, but we all know, no one is safe in the Star Gate Universe.

I enjoyed this episode. I actually had forgotten about it too. It was very sad to see Kate get killed off. As scootermom said, she was a good actress. I liked the character as well. I also wished we could’ve gotten to know more about those crystal entities.

It is the best the acting is totally great.