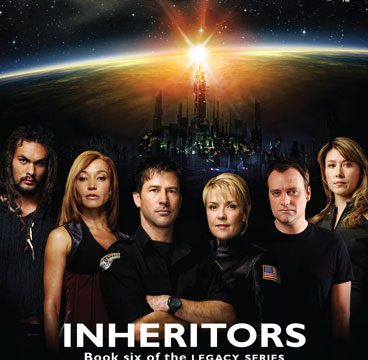 Legacy was conceived to be a six-book limited series written by multiple authors, picking up where the show left off and continuing the story as the team makes a return to the Pegasus Galaxy. The first installment, Homecoming, was published in the fall of 2010. The sixth, Inheritors, arrived in the spring of 2013.

The new books will form a “two-book coda” to the Legacy series, according to Fandemonium. Authors Jo Graham, Melissa Scott, and Amy Griswold will co-author Stargate Atlantis: Unascended.

The book will be available later this spring.

On the SG-1 front, look for Stargate SG-1: Apocalypse — a trilogy that “will take Colonel Jack O’Neill and his team into dark and uncharted territory.”

Sally Malcolm (A Matter of Honor, The Cost of Honor) and Laura Harper (Sunrise) to pen the SG-1 books. Book 1 is titled Revelations, and will hit the shelves this summer.

Keep it with GateWorld for more on the new books, and find the latest from Fandemonium at StargateNovels.com and on Facebook.

Good news. The SG novels are always pleasant diversions. I had pretty much come to the conclusion that the series had run its course considering the long gap since the last entry (I keep watch for them occasionally on Kindle). I am pleased to be wrong.

i’ve read all but one of the sg1 novels, and all of the atlantis legacy series. in fact, the legacy series were the first stargate novels and read, and i LOVED them.

so i’m really looking forward to the new sg1/atlantis novels. except for the vala focused one, but i’m hoping there’s enough other stuff in there that i can grab onto besides her.

I dislike these Legacy novels greatly, they have very little of what I loved about SGA in them – namely Team adventures.

I love the fandemonium novels, but not Legacy. I felt the characterisations were not so good. I was really hoping for new SGA novels completely unconnected to Legacy, so this is a bit of a disappointment.

Plenty materilas for new series!!!!! MAKE IT HAPPEND IF YOU NEED MONEY SUPPORT WE WILL DONATE!!!

I’m really looking forward to the Legacy novels, as well as the collection of short-stories they are planning to release later this year. They mightn’t be Lord of the Rings, but they are written to a standard of the TV-series, if not better sometimes!

I’m always grateful for companies like Fandemonium and Big Finish Productions, as they keep the Stargate active. Thanks guys and girls!

I love Stargate novelizations, but…. NOT the Legacy series. I’d love to find some books that are NOT part of that series. :-(