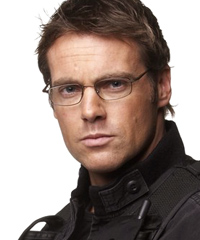 SG-1's archaeological expert, responsible for cracking the code to first activate the Stargate. A student of language, mythology and ancient cultures, Jackson's knowledge and razor-sharp wit is key to encounters with alien civilizations and displaced human colonies across the galaxy. Sometimes awkward, sometimes socially inept, he is driven, intelligent, and an invaluable member of the Stargate program.

Jackson has a unique way of looking at the world, one that sets him apart and often alienates him from others at Stargate Command. He is close friends with Samantha Carter, who often sees eye-to-eye with him, and rarely opposes his side. Jackson's friendship with Teal'c is more out of respect, as one is a scientist and the other a warrior, but the two often find ways to connect. They share a knowledge of the Goa'uld and the ancient gods they impersonate, and a desire to see them destroyed.

Jackson also has a deep and complicated friendship with Jack O'Neill, who frequently takes opposition to his side in matters of galactic concern. Often a moralist, Jackson verbally spars with O'Neill, a pessimist, to present a balanced perspective to the SG-1 team. The two have been embroiled in numerous ethical controversies over the years, but continue to be loyal friends.

Daniel was probably born in 1965. His birthday is on July 8.

Claire and Melburn Jackson are killed in an accident. From "The Gamekeeper."

When Daniel was eight years old, he bore witness to a horrific scene as he helplessly watched his parents' die. Claire and Melburn Jackson were establishing a new exhibit in the Manhattan Museum of Art when a column of stone fell on them and crushed them both. Daniel was taken into the custody of foster parents; his grandfather, Nicholas Ballard (also an archaeologist), did not take him in.

Jackson grew up to become an eager archaeologist and specialist in ancient cultures and myths. He apprenticed Dr. David Jordan alongside friends Sarah Gardner (with whom Jackson was romantically involved for a time) and Steven Rayner, digging deep into the mysteries of the past. Daniel held to his belief that the great pyramids of Egypt were landing platforms for alien spacecraft, and was ridiculed by the academic community for those ideas. As it turned out, a chance encounter with a mysterious woman, Dr. Catherine Langford, gave him his chance to prove his theories were, indeed, true.

Jackson and O'Neill fight. From "One False Step."

Put to work deep within the Creek Mountain complex, Jackson spent two weeks deciphering mysterious Egyptian cover stones that bore mysterious symbols he eventually concluded were star constellations. Soon he deciphered the seventh symbol of those constellations, enabling the activation of a mysterious object called the Stargate -- for the first time in more than 50 years.

Jackson accompanied Colonel O'Neill and the first team to the world of Abydos, where he helped to defeat the Goa'uld Supreme System Lord Ra. An Abydonian native, Sha're, was presented to him as a gift by her father Kasuf, leader of the Abydonian people. An unexpected present indeed, Jackson chose to remain with the new culture after falling in love with Sha're and reopening the door to allow the others to return home.

Daniel and Sha're are reunited. From "Secrets."

One year later Jackson welcomed the return of O'Neill and several members of the team, including Samantha Carter. He told them he had come to learn that the Stargate goes to many other worlds. After they had left him on Abydos, Jackson had begun exploring and discovered a map room with gate coordinates to Stargates spanning the galaxy.

Sha're was soon captured by Apophis and his serpent guards, as was her brother Skaara. The Goa'uld took them through the Stargate to the planet Chulak. Jackson joined SG-1 to pursue his loved ones, only to discover that Sha're had been taken as a host to Apophis's queen, Amonet. Daniel vowed to find her, and remained with SG-1 to accomplish this incredible task.

One Abydonian year to the day Daniel returned with Teal'c to his former home to discover that Sha're had returned on her own. The Goa'uld Amonet was asleep, in order to allow Amonet and Apophis's child to mature and be born. Jackson embraced the reunion, confessing that, though he was distressed by Apophis's child growing in his wife's womb, he still deeply loved her. Jackson brought the infant into the world with his own hands, and hid the baby away with Kasuf.

Share perishes at the hands of Teal'c. From "Forever In a Day."

Roughly a year later Jackson received a message from Kasuf that Amonet had returned and taken several Abydonians captive. The child had been sent away with her handmaiden to the legendary planet Kheb. Daniel confronted Amonet and fell victim to her hand device. Within the hand device Sha're communicated her last thoughts to Daniel, telling him where Apophis's child was taken, and telling him to forgive Teal'c for killing her and Amonet to save him. Sha're was dead, but Daniel had a new mission: find the boy.

His search led him and SG-1 to the world of Kheb, where he discovered the child was in the care of the powerful being Oma Desala. Jackson had vowed he would find and protect the boy. He had succeeded at the first, and decided the wisest decision would be to leave the child in the hands of Oma, where he would be safe from the Goa'uld.

Nearly a year later, the rapidly-grown child -- Shifu -- visited Jackson to learn about his mother. Like Oma Desala, Shifu had ascended to a higher plane of existence. It was a reunion that was telling of Daniel's own future. After being exposed to a lethal dose of radiation while saving millions of lives on the planet Langara, Daniel lay dying in the S.G.C. infirmary. Oma Desala came to him in a vision and offered him the knowledge to ascend. After debating whether or not to accept her invitation to begin a new journey, Jackson decided he could do more as an ascended being and joined her, leaving his team behind.

As an ascended being Daniel witnessed many things -- but because of the rules of the other ascended beings (who turned out to be the Ancients, the Stargate builders), he found himself unable to step in and alter events for good. He visited O'Neill and helped him survive a traumatic turning point in his life at the hands of Baal, as well as helping Teal'c to survive a terrible massacre.

Realizing the Goa'uld Anubis was on his way to annihilate the people of Abydos, Daniel enlisted the aid of SG-1. O'Neill convinced him the only way to protect the people was to break the rules of the Ancients and intervene. Disobeying Oma's warnings, Daniel confronted Anubis on board his ship and tried to use his powers to stop him -- after the Goa'uld was not pacified when Jackson turned over the key to a powerful weapon. Abydos was destroyed, Oma helped its people ascend, and Daniel was whisked away to face judgment by the Ancients.

The Ancients leave Daniel naked in a field. From "Fallen."

Months later, SG-1 found Daniel on the Ancient planet Vis Uban with no memory of who he was. His sentence had been to return to his human form, and to have his memory wiped clean. O'Neill and Carter convinced him to return to Earth with them, and gradually he began to regain his memories of his life before ascension. Soon his memories fully returned, and Jackson has taken his second chance at life and run with it. He continues as a key member of SG-1.