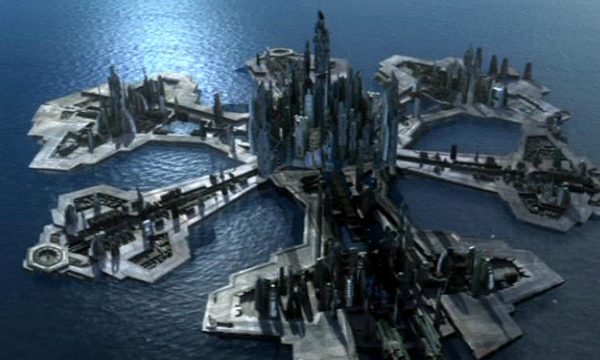 It’s been ten years to the day since Stargate Atlantis premiered on Syfy (then SCI FI) Channel on July 16, 2004.

The show came after seven successful seasons of Stargate SG-1 — five on Showtime, and two on Syfy. The franchise had taken off since moving to basic cable in 2002, and Syfy was ready to make Stargate its own with an original series.

The spin-off also turned Stargate into a bona fide franchise. The original plan was to end Stargate SG-1 and have Atlantis set on Earth, but the network wanted both shows. Producers bit into the very large task of producing 40 episodes of television every year.

“Rising” aired as a 2-hour feature event on a Friday night, drawing a record 3.2 household rating and more than 4 million viewers.

Joe Flanigan starred as Major John Sheppard, an O’Neill-esque mix of courage and humor. On his new team would be David Hewlett as Dr. Rodney McKay (originally written as Dr. Benjamin Ingram, an African-Canadian) — a hold-over from SG-1, now written to be a bit more loveable (if just as surly); Rainbow Sun Francks as Lt. Aiden Ford, a young explosives expert; and Rachel Luttrell as Teyla Emmagan, an Athosian princess (originally named “Mikala”). (Paul McGillion — Dr. Carson Beckett — would be upped from recurring player to series regular in Season Two.)

Leading the expedition to the Pegasus Galaxy was Torri Higginson as Dr. Elizabeth Weir, linguist and diplomat fresh off a short stint as the head of Stargate Command on Earth. (Torri had guest starred in the SG-1 season premiere, “New Order,” the week before.)

The new series was created by Brad Wright and Robert C. Cooper. Atlantis would go on to run for five seasons and an even 100 episodes, concluding in 2009.

Relive the beginning of Stargate Atlantis in GateWorld’s episode guide and the screencap gallery, and look for our exclusive interviews with the cast from 2004 in the Interviews archive!

I don’t think you can call this a celebration of a “milestone” unless it was still on TV. Unfortunately, it is not :( God I miss Stargate.

I remember watching it when it premiered. It was exciting. I liked it. Like many others though, I’m very upset that it won’t be finished.

Still my favorite series of all time. Making 40 hour long episodes a year is unheard of in today’s programming. And for the show to be as good as it was is a huge accomplishment. Cant wait for the movies to come out.Its been too long since we had some new stargate (even if its a reboot)

I do so miss the show. Quality work.

Every time I log in here, I keep hoping there will be an announcement of more Atlantis–and that the Emerich reboot films are canceled.

I really don’t understand MGM’s attitude regarding SG1,Atlantis, & Universe. You have millions of fans of the TV shows. Since DVD movies don’t seem to be in favor anymore why not follow the Netflix example and do movies on Netflix or Amazon to wrap up each series.

Went to the convention in Chicago at Westin Ohare this past weekend and saw Joe Flanigan, David Hewlett, Paul McGillion, Jason Mommoa, Jacqueline Samuda, Cliff Simon, Connor Trineer, Gary Jones, Teryl Rothery, Tony Amendola and Michael Shanks. What a great convention it was!!! Just wanted to say thanks to all those wonderful people for taking the time to keep Stargate alive and invest in the fans with their time and stories they so graciously shared.

10 yrs and the show is still watchable, funny heroic has not dated in time, what a mistake to change what works i.e. SG1 all seasons and then throw us to the crap of SGU, sorry guys switched off after 3 episodes and being faithful for yrs, sorry that joe couldn’t buy SGA out and use crowd funding for more SGA tv movies even a few would have made us happy…yes 10 yrs and now a film reboot r they clowns out there we already have our loving characters…. sadly missing fine entertainment!