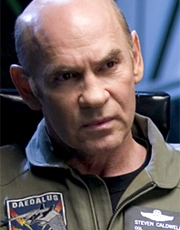 Two of Stargate‘s own are returning to their roots: the venerable science fiction drama The X-Files.

Actor David Duchovny told David Letterman in a recent appearance that Mitch Pileggi (“Walter Skinner”) and William B. Davis — a.k.a. the Cigarette-Smoking Man — will join him and co-star Gillian Anderson for the 6-episode revival. (Watch the video below.)

FOX announced last week that they are bringing back the iconic show, which ran from 1993 until 2002, for a 6-episode “event” season. Anderson and Duchovny return, along with series creator Chris Carter.

Pileggi played the recurring role of Lt. Colonel Steven Caldwell, commander of the Earth ship Daedalus, on Stargate Atlantis. He appeared in some 22 episodes of the series’ run.

Davis guest starred as a Prior of the Ori in the Stargate SG-1 episodes “Babylon” and “The Fourth Horseman, Part 2.” He has since played a key recurring role on Continuum (which airs its final episodes later this year).

FOX has not made any official announcements about their casting.

The X-Files will begin shooting this summer in Vancouver — where the series filmed for its first five seasons — and is expected to air in 2016. For more bookmark our sister site, SciFiStream.com!

very much looking forward to these 6 episodes.

this is great news been following this some time looking forward to seeing it.