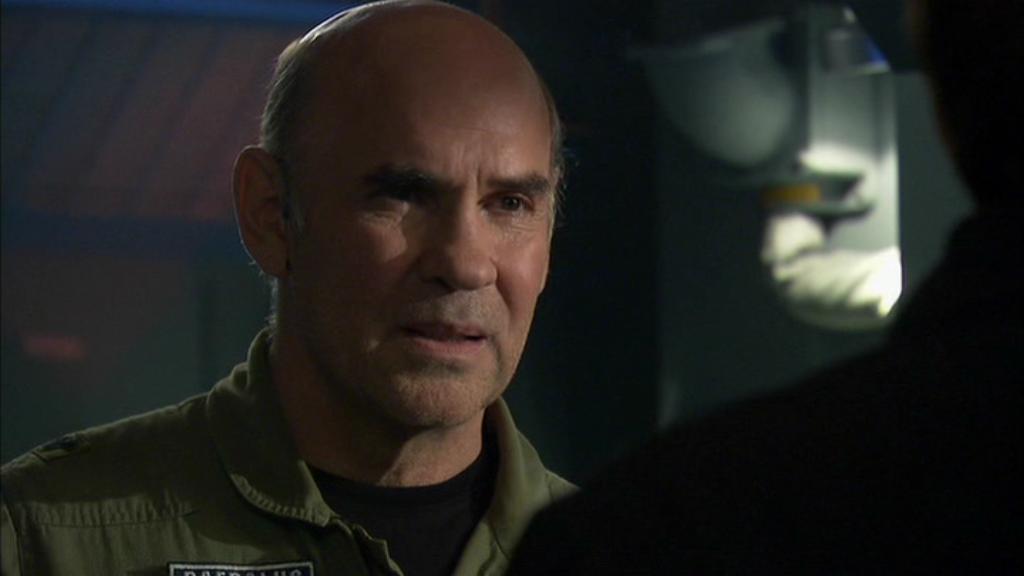 Commander of Earth's advanced battle cruiser Daedalus, Colonel Steven Caldwell is a stern, by-the-books military man. Caldwell has a somewhat contentious relationship with both Atlantis's John Sheppard and Elizabeth Weir, and wanted to be put in command of the distant outpost. Only the support that Weir has from the President and the United States's foreign allies has prevented it.

Instead, Caldwell commands the Daedalus, which serves as Atlantis's military muscle and makes trips between Earth and the Pegasus Galaxy. When he is on Atlantis he does at least outrank Sheppard, and makes sure that the Lt. Colonel knows it.

Caldwell and his crew saved Atlantis from the first wave of the Wraith attack, and helped to fool the Wraith into believing the Ancient city had been destroyed.

The Siege, Part 3 - Colonel Caldwell and the Daedalus arrive in time to save Atlantis from the first wave of the Wraith assault.
The Intruder - The Daedalus ferries the Atlantis command staff back to the Pegasus Galaxy after a trip home to Earth, and Caldwell must deal with a Wraith computer virus infecting his ship.
Runner - Caldwell cautions Sheppard about pursuing Lt. Ford, ordering him to shoot his friend if he cannot be captured.
Trinity - Caldwell brings the Daedalus to the rescue of Colonel Sheppard and Dr. McKay, using the Daedalus to deflect weapons fire from the Dorondan homeworld.
Conversion - While Sheppard transforms into a creature similar to an iratus bug Caldwell is given his responsibilities and, in less than 24 hours, begins to make extensive changes in the Atlantis’s command structure.
Aurora - Caldwell takes the Daedalus to the Ancient warship Aurora, but is not willing to stay long for fear that the humans’ survival from the Wraith attack will be discovered.
The Hive - Caldwell pushes the Daedalus hyperdrive engines to reach Pegasus in time to aid in the recovery of Colonel Sheppard and his team, but instead witnesses the destruction of two Wraith hive ships which turn on one another.
Critical Mass - Caldwell returns to Atlantis to help the expedition determine the Trust operative, but they soon realize that the Colonel has been compromised by a Goa'uld.