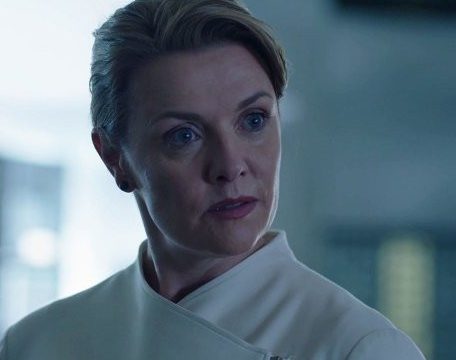 Amanda Tapping will guest star in an upcoming episode of the show, which will air its 10-episode first season this summer on Syfy Channel and Canada’s SPACE. She’ll play a “fiercely clever scientist,” who uses her charm to keep her true intentions hidden from the show’s heroes.

The episode is slated to air in the back half of the season.

Killjoys follows a trio of intergalactic bounty hunters — actors Hannah John-Kamen, Aaron Ashmore, and Luke Macfarlane — who chase deadly warrants thoughout the Quad, a distant planetary system that is on the brink of war. Take a look at the trailer below.

Tapping played Samantha Carter for more than a decade, appearing on all three Stargate series before going on to headline the original series Sanctuary. In the years since she has guest starred on The CW’s Supernatural and focused on directing, racking up credits for such shows as Primeval: New World, Continuum, Olympus, and Dark Matter — the upcoming series from former Stargate scribes Joseph Mallozzi and Paul Mullie.

Killjoys premieres June 19 on Syfy Channel, and will air on Friday nights alongside Dark Matter. Head over to our sister site at SciFiStream.com to keep up with both shows!