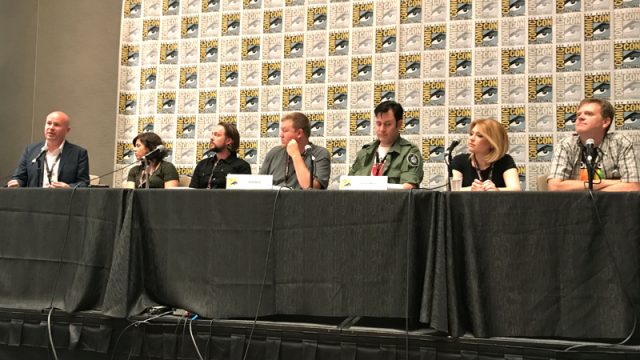 Mercedes was introduced to Stargate fans at the 2017 San Diego Comic-Con panel.

I’m always interested in hearing about San Diego Comic-Con, but I never have any intention of going — that is until I heard there was going to be a Stargate 20th anniversary panel.

After frantically searching, a friend was able to add me as her plus-one, so I got a last-minute ticket to the con and literally went because I needed to be there for Stargate. I drove down Wednesday afternoon, got a good night’s rest, and spent all of Thursday in the room waiting for the Stargate panel to start. I sat through some pretty cool panels, and slowly made my way to the front row.

As the day went on I noticed more and more people in the room had Stargate shirts on, and I knew I wasn’t alone. I was among people who would understand my references, for crying out loud! The anticipation grew as it got closer to 6 p.m. 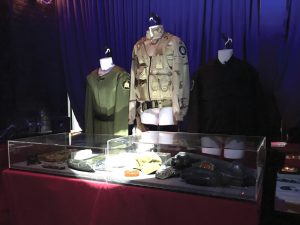 A display of costumes and props from the Stargate television series decorated the panel’s after-party. (Photo by Sonia Melinkoff)

As soon as the panel started, one of the first announcements made was a very vague “Stargate is back,” and the room erupted with cheers. The panelists explained a little about what Stargate Command will be, and I thought to myself, “Oh, so Stargate ‘coming back’ means that we’ll just be able to watch more interviews and behind the scenes” … and I was a little disappointed.

But next they introduced Sam Toles, MGM’s Senior Vice President of Digital. His news completely floored me: he confirmed a new show, Stargate Origins! Someone mentioned the “first origin story” will be about Catherine Langford, and it sounds like there will be more origin stories to come! I assume that’s if this one does well, at least.

What I love is that we, the fans, will be able to interact with the show through Stargate Command. I can’t wait to see how that will work once it’s up and running!

After the panel, I walked to the after-party a few blocks away. It was in a bar that had Stargate props, costumes, a photo booth, and TVs playing what looked like the first DVD from SG-1 Season One. The bar staff were wearing Stargate Origins t-shirts, and the panel members were in attendance. I said hi to Sam Toles, told him about how I got into Stargate, and thanked him for listening to the fans and helping bring back my favorite franchise. Stargate Origins writer Mark Ilvedson and director Mercedes Bryce Morgan were also around and chatting with fans, as well as Kieran Dickson, the editorial director.

Towards the end of the party, there was some impromptu trivia, and I won some screen-used Replicator blocks. To be honest I didn’t really care about them being screen-used, I was just excited to have a few of Reese’s pieces (thankfully, they had been disabled when O’Neill shot her!).

Now that the initial excitement of Comic-Con has died down a bit, and I’ve let the news of Stargate Origins sink in, I am really looking forward to what this new show will bring to the table. I am a die-hard Stargate fan, and will eat up anything that the franchise has to offer.

I hope this can live up to my expectations, and am excited to see what other stories are to come!

Sonia is a Tau’ri-based small business owner, cat enthusiast, and Stargate quoter. She lives in North Hollywood, California. Follow her on Twitter @NerdyNovelty.

I’m not sure how I feel about this since it won’t have the people from the SG1 series in it .I grew to really love the characters of this show and the actors who portrayed them. I guess l’ll just have to see.

Here’s my one and only question: did they discuss any issues related to the new show(s) being connected to movie continuity ONLY or the TV show(s) as well?

Both above concerns are mine as well. Characters in SG1 were our friends, as silly as that might sound, and we did indeed love them. The creators did such a good job in making a whole universe…I think it would be counterproductive to undo it. I would hate to see a “reboot”, though it was tricky, I thought it worked for Star Trek, but, I’m also a little wary of this new show they’re doing, Discovery. On one hand, grateful to see our franchises back, on the other…well, I guess no one is going to be completely happy!

Should mention…sorry…I think that Catherine Langford is a great character, and this could all be very intriguing in the right hands!

I hope that this is the beginning of something new, but I’m still upset about 10 minute episodes. Even sitcoms have 23 min episodes without commercials. I’m not very inclined to subscribe for 10 minutes a week. Maybe the first one will be free and the next ones with be complete episodes only available by subscribing. Hopefully it will be good. If it’s pay they might as well just sell Stargate to a company that actually cares about it’s customers/fans. I don’t have a lot of faith in MGM.