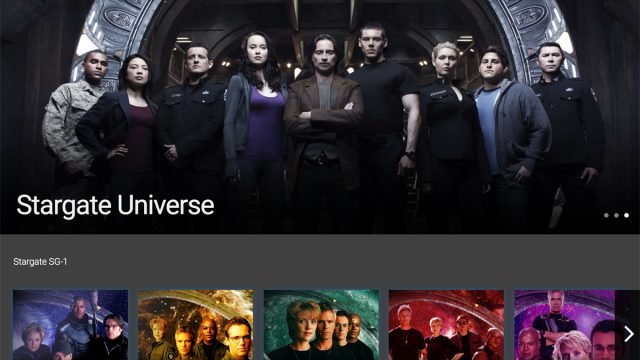 Today I got a sneak peek at Stargate Command, MGM’s new digital platform that will serve as Stargate’s new official online home. The service offers free content and a paid subscription service, and opens for business Wednesday, September 20.

I’ll leave it to you to explore the site after its official launch, but in the meantime I do want to share some first impressions for those eager for the next evolution of Stargate online.

We’ve passed along to MGM some of your questions posted on Twitter, from app availability and device access to episode streaming quality. GateWorld will bring you those answers as soon as we have them. 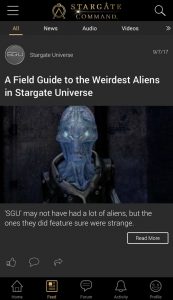 Right now we can tell you that you’ll be able to view the site on the Web, and download the Stargate Command app on the Apple App Store (iOS) and Google Play (Android) beginning Wednesday (in select countries).

All-Access will be available to folks in the United States, the U.K., Canada, Germany, Australia, and New Zealand starting tomorrow. But all of the site’s free content will still be accessible everywhere.

Although Stargate fans in other countries won’t be able to get all of what the studio is calling the platform’s “premium” content, Stargate Command does have something for everyone. If your love of Stargate focuses on one particular show or the entire universe, you’ll find lots of goodies here. (There’s also a handy way to filter the Feed by show.) And if you’re a long-time fan who thinks you’ve seen every photo and heard every anecdote, MGM is about to open the floodgates of the archives and show us things we’ve never seen.

Stargate Command goes worldwide on Wednesday. After you’ve had a chance to check it out, come back here and tell us what you think! We’ll continue to provide full-coverage of the entire Stargate franchise here at GateWorld.

UPDATE: We continue our review here with post-launch analysis, including some hands-on testing of the site’s video streaming.

It’s gonna be pretty important to me and a lot of people that there be some kind of streaming app. Casting to a chrome box is great, but what about those of us with a well-loved Roku?
Thanks for the updates!
(Can’t believe I didn’t have an account before today! Visitor since 2005)

Here’s hoping there’ll be a UWP app for Windows. Would really like to watch Stargate on my computer, Xbox, tablet, and the rumored Surface Phone!

@Benjamin Someone asked that a similar question, about it becoming available for Windows 10 and the answer from Stargate Command was “not at present”. I installed the app on my phone (can’t do much more than that since I’m not eligible for exclusive membership). It certainly looks colorful (and is a freakin’ drain on my battery power). I’m not an app-user and don’t have many apps in general on my phone — I only have useful apps. I don’t even have games installed. This app classifies as a useless app (not to be interpreted as negative people). I don’t do… Read more »

The site is dead. I am wondering if it is down well to bring it live aka get things out to the world or if they underestimated the onslot that was coming.

Definitely the former. Depending on their deployment strategy, the old has to die so the new can be born! Maybe something like a DNS switch (in which case it could take 24 hours to propagate worldwide).

Well the site is dead and I cannot access it. :(

Make sure to use a https://www.stargatecommand.co URL. Note the www.
Some links on the site still point to https://stargatecommand.co, that site is toast and it’s DNS entry is different than www.

Thanks for that, Lt. Carlson. This will be a simple server configuration they can fix easily, but for now only the www version of the domain is working.

I can’t believe you are promoting that train wreck of a cash grab. The site is designed for Apple mobile devices FIRST, Android Second, with web browsers as a third thought. Heck they couldn’t even hire an admin that knew what the they were doing and screwed the DNS which is mind boggling. (NOTE I am a sysadmin as well as running several webservers, I kinda know this stuff). There appears to be a server resource problem as it seems either the memcache or redis isn’t working properly or it could be the numerous calls on each page to outside… Read more »

So far, this has been a disaster. I have to even get my email saying I have All-Access. My wife gave it to me as a gift and she got an email saying it was purchased and our account his been charged the $20 with the promise I would get my log in information right away. That was last night and I have not gotten anything. On top of that, I do not even see an iOS app in the Apple store to be able to watch it. Have I missed that? I do a search online and find it… Read more »

Being in IT I have been through allot of product launches and problems/glitches are not unheard of. To be honest this isn’t the worst launch I have seen.

MikeS,
It has been a month since I signed up. I registered an account using Facebook and it seems to be working ok for me. They never sent me an ID but as of right now all the All Access stuff seems to be working. Not sure if I gave them my facebook ID during the setup so they might be linking the account that way.

I signed up a while back and didn’t get a username/password sent to me. To access the site I put in my e-mail addy and used “forgot password” and they sent an email that let me actually setup a password lol. Personally I think the site is pretty bad at the moment even if it wasn’t lagging/timing out all the time. *The video player is very lacking in options compared to netflix/amazon/youtube etc… *the forum is a big blocky crapfest instead of a real forum and it has no subforums so it won’t ever be anything worth actually using unless… Read more »

I know we should expect some issues on the first couple days after launch, but the website is practically unusable. 9 times out of 10, the browser times out or it fails to load either on the home page or navigating around the website. When it does load, it doesn’t log me in automatically, even though I told it I am ok with the cookies. Occasionally, pages load with all the elements stacked together, sometimes with videos playing randomly in that stack. the video player doesn’t work at full screen in firefox, and Edge is having even more trouble just… Read more »

There is no forum — just a cluster of messages with comments and likes. No order, only chaos. In the app, the posts are randomly ordered with no sense of direction, but on the website it’s even worse. It looks like a Tumblr copy and I can honestly say that this is not the way for me.

So, I’ll probably stay for the articles, quizzes and polls, but as far as interacting goes with other fans — Gateworld *is* definitely THE PLACE to be!

The app isn’t available in the App Store on my iPhone or iPad.
I have to bookmark or enter the site in GOOGLE search to get here.

I paid my $20 and still can’t access anything on the site, starting to wonder if they are running a take your money and run type of setup.