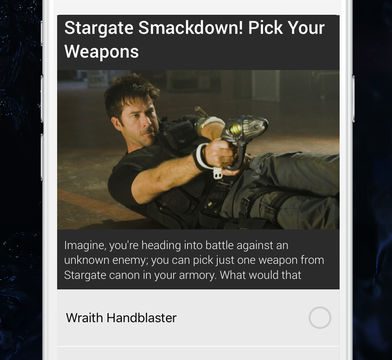 The new official home for Stargate online is up and running, with MGM this week launching the Stargate Command digital platform. The site’s home is at StargateCommand.co.

The site is available on the Web worldwide, and through both Apple iOS and Android apps now available in the Apple App Store and Google Play. In fact the site appears to be designed especially for mobile devices.

The mobile and desktop site includes articles, quizzes, photo galleries, forums, and more interactive features delving into more than two decades of the Stargate franchise. Fans can create an account, post comments, “Like” content, and rise through the ranks from “Airman” to “Ascended” in Stargate Command’s member point system.

The site will also offer fans insight into the production of Stargate Origins, the short-form series that will live on the service when it premieres in a few months’ time.

“All-Access” paid subscribers have access to a bit more content. But the big difference is the ability to stream any episode of Stargate SG-1, Atlantis, Universe, or the films on any device.

That’s available now in the United States, U.K., Canada, Germany, Australia, and New Zealand. (Why not worldwide? Legal agreements with local broadcasters and distributors may stand in the way in your country.)

The site had a somewhat rocky start on Wednesday with frequent page loading errors, a mis-coded profanity filter, and other annoyances (even drawing the attention of Variety). The MGM digital team and app producer TopFan have been busy with fixes since then, including better load balancing on the servers that has rendered the platform more stable. 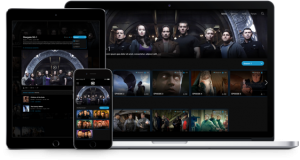 Stargate Command is designed to work with all your media devices – though getting it on a TV screen is still a challenge.

Take a look at GateWorld’s “First Impressions” review of the site, which was based on a demo rather than the live version of the site and did not include video streaming tests. On that front Stargate Command does still need some upgrades to truly live up to its potential, including more smooth streaming of HD episodes and the ability to cast to a TV screen natively from the site’s video player using Google’s Chromecast.

Casting from the browser tab is far from ideal, and the service has a ways to go before it ought to be compared to billion-dollar players like Netflix and Hulu. But our Friday video test (Atlantis‘s “Progeny”) did work significantly better than one on Wednesday night (SG-1‘s “Sacrifices”). After a few minutes of low-res viewing the video quality caught up and was more consistent throughout the remainder of the episode, averaging between 480p and 720p.

Casting this way will still make the signal too dependent upon not only your local wi-fi strength but also the processing power of the computer. Watching on a computer, tablet, or phone should produce more consistently high-quality video streams. 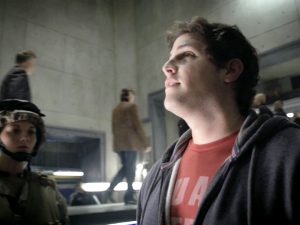 Finally, today we tested SGU‘s “Air, Part 1” by connecting a laptop directly to the television via HDMI cable. The streaming was smooth and high-res, playing flawlessly over wi-fi at (at least) 720p.

“Air, Part 2,” however, quickly proved unwatchable as it appears that the audio channels have been incorrectly mixed for Stargate Command’s stereo presentation (sidelining the main dialogue).

Though we still await official comment from MGM, it is noteworthy that this month’s initial launch of the site does not include apps for popular TV devices such as Roku, Apple TV, or Amazon Fire TV. Stargate Command’s official Twitter account has indicated that the more popular devices are currently being explored in order to expand fans’ access to the service’s deep library of episodes and films.

I think a chromecast feature is really needed and the app seems to be a yearly subscription as opposed to a once off fee as was first advertised.

It was never advertised as a once-off fee. There was always an end-date attached to it, which is clearly stated in the FAQ of Stargate Command (I’ve read every page of the website before it disappeared and got replaced with the current setting).

To be fair, it would be extremely naive to think that you’d be getting lifetime (for however long lifetime might be in regards to the platform’s existence) access for only 20 USD. ;-)

Will you be reviewing the quality of the video more in-depth? I’d really love to see some side-by-side material between the streams and DVD/Blu-Ray/Amazon HD (SGU Season 2) without any “well it depends on the strength of your WiFi and Chromecast support isn’t quite there yet” that is unrelated to the quality of the stream straight down the pipe to your modem; obviously if you have poor internet, you’re not going to have the best of times anyway, but if you’re nowhere near saturation, quality should be top notch… but is it? I did my own side-by-side for one episode… Read more »

The site is being managed by amateurs plain and simple. Their devs built the website using WebKit or some other framework because someone probably “told” management, or looked at google analytics, that Mobile devices are the fastest growing segment in computing but they neglected to take 1 very big problem into account. The cost for end users to stream the content on mobile, unless you have WiFi access, would deter and/or limit people from streaming those video’s especially in markets where mobile data is expensive and slow. It’s quite odd but each episode is over 300megs at 360p resolution. This… Read more »

I think they just killed stargate… because:
a) There are basically no legal way to stream stargate in most countries via online services,
b) Their new site just says: ‘We’re sorry, but there are no Series available for your location.’

Taking the show off Netflix and other platforms around the world is the biggest mistake they could ever make.

Colin: Fortunately, there is no indication that the shows are being taken off Netflix or any other providers. Stargate Command is in addition to what already existed in your country. I know it’s certainly frustrating not to have access, but “they just killed Stargate” is a bit hyperbolic.