Beware of SPOILERS in this interview for the conclusion of Stargate SG-1, including the film Stargate: The Ark of Truth!

With the debut of GateWorld 3.0 we’re proud to launch a brand new series: Stargate: The Lost Interviews! Starting things off is GateWorld’s very first interview with actress Sarah Strange, who played the pivotal role of the ascended being Morgan Le Fay.

Sanctuary fans will also recognize her for her role as Dr. Allison Grant (Season One’s “Kush”). Before that her credits include Da Vinci’s Inquest, The Outer Limits, and Poltergeist: The Legacy. More recently she has co-starred in the Garage Sale Mystery series of TV movies for Hallmark.

GateWorld’s Chad Colvin caught up with Sarah during Creation Entertainment’s Stargate convention in her home town of Vancouver in 2012. In our conversation she talks about her early work in animation, the challenges of playing an Atlantis hologram in “The Pegasus Project,” and playing a role drawing from Arthurian legend.

Stay tuned for more Lost Interviews as we do some archaeological excavation in our archives!

GateWorld: For Gateworld.net I’m Chad Colvin and I’m in Vancouver, British Columbia with Sarah Strange who played Morgan Le Fay on Stargate SG-1. Sarah, thank you for taking the time to talk with us!

Sarah Strange: Thank you so much for inviting me to talk with you! This is really cool. 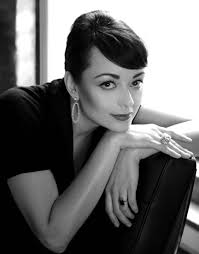 GW: You’ve been Vancouver-based for a lot of your career. And I know your early credits included a ton of voice work for animation, most notably the anime Ranma. Can you talk a bit about how you got your start in the industry and the transition from strictly voice work to more on-screen roles?

SS: I started really naturally. I grew up in a show business family. And it was just a very natural transition.

I was actually in high school, and they were casting a high school drama and came to high schools for auditions. And I got the first thing I ever tried out for. Did that for six years.

So, I was actually doing on-screen work at the same time as the cartoon work. At that time in Vancouver there was a lot of both. And, so, a lot of on-screen actors were doing cartoons and vice versa. And it was just a real boom time. It was super fun.

GW: Do you prefer one medium over the other? I mean, are their comparisons? I know with the voice only, is it easier or harder to emote – to get the emotions across?

SS: It’s usually … you skate the surface a lot more. Now, I haven’t done it in a long time. And now with video games and voice work on video games – which is way more sophisticated that what I got to do when I was really involved in it – you can find subtleties and characterization that is very filmic. But the kind of cartoons that I did were really mostly pretty silly, and pretty basic. And lots of funny noises and silly voices and stuff.

But it’s super fun, and it’s very different not having your face to convey what you need to convey. There are some people who are truly brilliant at it. And hats off to them. 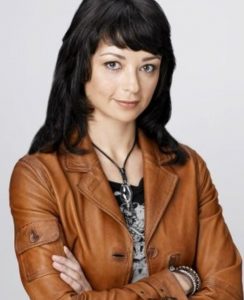 GW: There’s a fair share of genre credits on your resume, but you’ve also racked up some substantial long-running credits on series that are more contemporary, like Da Vinci’s Inquest and Men in Trees. When you are choosing roles, does the type of program ever effect your decision as to whether or not you decide to go for it, or how hard you lobby to get it?

SS: Absolutely! But, in sort of the journeyman actor’s case, if you’re not Sandra Bullock – which I’m not – then a lot of the roles just choose you. It’s a question of opportunity meeting readiness.

There are certain things that I have declined to participate in just because they didn’t appeal to me or I felt negatively about whatever message that I thought they were sending. But for the most part being an actor is just about being whoever … whoever you get to be. The variety is actually what is really, really fun about it.

GW: Do you have any favorite roles?

Theresa was great on Men in Trees. Mostly because the cast was so much fun. We had such a blast working together. Got to see Jewel. Come on! That’s amazing!

Who else did I like? There was a miniseries called Foolish Heart, which was done in Toronto about ten years ago, I think. And I did a little turn as a reporter. It was an homage to His Girl Friday, which was the role was made popular by Rosalind Russell. So, it was shot in black and white. It was all like 1940s fast-talk. And that was a blast. I loved it.

GW: You’re well known to Stargate audiences as the ascended Ancient “Ganos Lal,” also known as Morgan Le Fay. Were you ever drawn to the Arthurian legends when you were a child? Things like King Arthur and Merlin and Excalibur and the Knights of the Round Table? 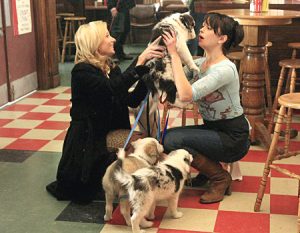 SS: Absolutely. Probably more than myth set in space, that sort of historical mythology is really what I was interested in as a kid. And Morgan Le Fay is such an interesting character. She, sort of straddles that line between good and evil and can be whatever …

GW: There have been different interpretations [of the character].

SS: Absolutely. And because it’s so old and so well known, people will put their own spin on it. She was one of my favorites. I love the Arthurian legend — knights and jousting and all that stuff.

GW: Now, I didn’t know initially – I’m very surprised to learn – that the English accent you had as Morgan on SG-1 is [not your own]. It is so convincing!

GW: I almost … Can you just do British for a little bit?

SS: I would, but I don’t wanna sound like a nerd.

SS: I need to prepare a little bit. If you give me a script and half an hour I could come back and totally do it for you. [Laughter]