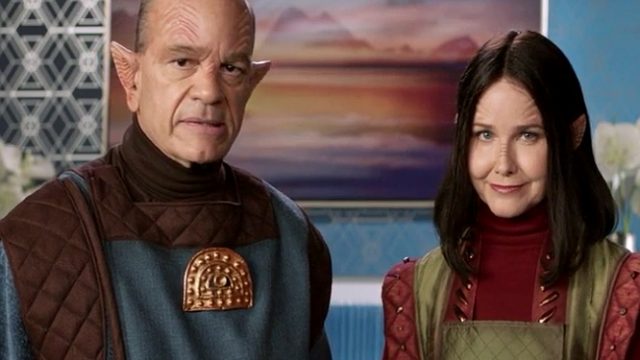 Picardo has been on set this week filming an episode for the second season of the FOX dramedy. He plays the alien Ildis Kitan, opposite Molly Hagan as his wife Drenala. The two are the parents of Lt. Alara Kitan (Halston Sage), chief of security on the Orville.

The characters made a brief appearance by video chat in the first season episode “Firestorm” (which U.S. viewers can currently watch for free at FOX.com).

MacFarlane tweeted out the news this week on Twitter:

GREAT work on The Orville today from @halstonsage @robertpicardo @joncassar and the rest of the team! Stay tuned!

There’s no word on whether Picardo’s return in Season Two will amount to a similar cameo, or a bigger guest starring role. But the fact that he is filming in March means he’ll probably turn up early in the new season.

After winning over the hearts of sci-fi fans in his seven-year turn as the Doctor on Star Trek: Voyager, Picardo made several guest appearances as Richard Woolsey on Stargate SG-1 and Atlantis. He joined the regular cast of SGA as the new base commander in its fifth and final year.

The Orville is expected to return to FOX this fall. For more on the series visit the Orville show guide on our sister site, SciFi Stream.

Did nobody else notice John Billingsley (AKA Doctor Phlox) in this episode?