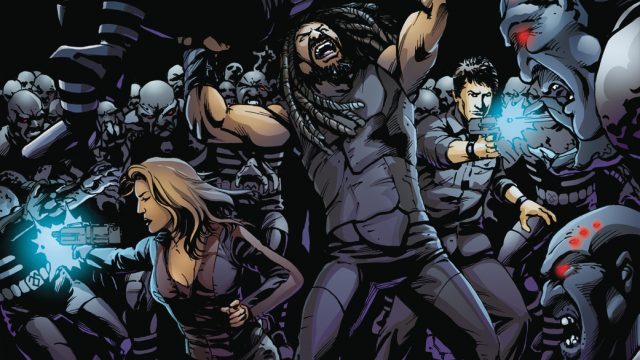 The newest issue of the Stargate Atlantis comic book is on shelves now, and could spell the beginning of the end for the villainous Ancient scientist, Janus.

That’s because “Singularity” Issue #1 is the first of a three-issue series that will conclude the comic’s current story arc. The story of Atlantis’s return from Earth to the Pegasus Galaxy and the return of Janus began in the very first issue of the run from American Mythology, which launched in May of 2018 with “Back to Pegasus.”

Look for the new issue at your local comic book shop today, or download the digital copy from Amazon Kindle and comiXology.

Writers Mark L. Haynes and J. C. Vaughn have taken the storyline through a total of 12 issues, which also included the trilogies “Gateways” and “Hearts & Minds.” They will depart the Atlantis comics at the end of “Singularity.”

Here’s how the publisher describes the new issue:

All of American Mythology’s Stargate Atlantis comics to date have been leading up to this! “Singularity” pits the Atlantis team against the out-of-control Ancient, Janus, and his alien army, with the fate of two galaxies on the line!

This is the first of three issues that will wrap up the epic events of “Back to Pegasus,” “Gateways,” and “Hearts & Minds.” Stargate Atlantis Singularity #1 comes with three covers — Main Cover by Greg LaRocque, Photo Cover, and a special Premium Limited Edition Cover by Clint Hilinski.

The character Janus was played by Gildart Jackson as a sympathetic protagonist in the first-season episode “Before I Sleep.” After traveling to the Milky Way Galaxy 10,000 years ago Janus evidently went on to continue developing powerful new technologies, including the time-traveling Puddle Jumper that SG-1 used to go to ancient Egypt in the two-parter “Moebius.” 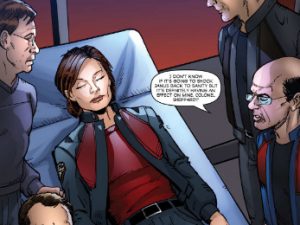 Readers looking to catch up on the story will soon be able to find trade paperbacks from American Mythology that collect each of the three-issue series. “Back to Pegasus” is scheduled for May 30, and “Gateways” on June 27. Those retail at $9.99 each.

“Singularity” Issue #1 is out now. Issue #2 is currently slated for a June 27 release, and the series will wrap up with #3 later this year.

American Mythology has not yet announced what is coming next for the Stargate Atlantis comics. Stick with GateWorld for the latest, and find the full collection in our Stargate Comics section!