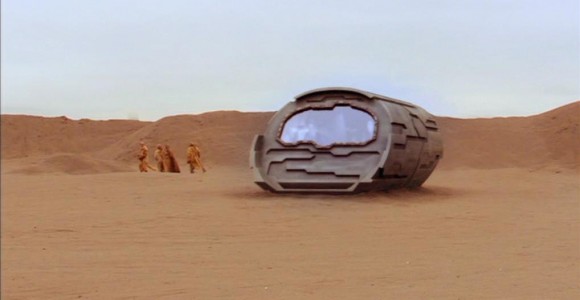 SG-1 travels back in time in a daring plan to steal a piece of Ancient technology from Ra, the powerful Goa'uld who ruled in ancient Egypt.

At Langford's funeral, her niece, Sabrina Gosling, hands Jackson Catherine's eye of Ra amulet and arranges to send him "a few" other items Catherine bequeathed him. Later when it arrives, the material from Catherine fills Jackson's entire office. Apparently she has bequeathed to him her entire collection.

Later, Daniel rescues Jack O'Neill from a mind-numbing briefing with SG-22. He has found evidence of a Zero Point Module depicted in Catherine's copy of an 1889 volume entitled "The Eye of the Sun." In a painting, the god Ra is holding something called "the heart of light," which bears a striking resemblance to a Z.P.M. – one that has never been found.

Later, Carter reports that satellite scans of Giza reveal no hidden Z.P.M. She thinks its there, but depleted. Jackson says it was a religious icon, never used as a power source. Teal'c suggests Ra may have taken it with him when he left Earth, but Daniel points out that they may not know where it is now, but they know it was in Giza – in 3000 B.C.

He suggests they use the time-travel-equipped Puddle Jumper ("It's Good To Be King") to retrieve the Z.P.M. – despite Carter's strenuous objections. When Daniel argues that Ra didn't know of the Z.P.M.'s significance (that it's not historically important and open a wormhole to the Pegasus Galaxy), Carter acquiesces.

While no one at Area 51 has made the ship work, Jack has the ability to control Ancient technology. Once in orbit in the Jumper, Jackson and Carter instruct O'Neill to concentrate on 3000 B.C. The time travel device pulses. They radio the S.G.C. but get no answer. And as the star patterns and clouds below are different, they decide they have succeeded.

Carter councils minimal interaction before SG-1, dressed in native Egyptian garb, remotely activate the Jumper's cloak and head for a peasant camp. Jackson meets Katep and his brother Selatis, who will be taking an offering to Ra, and convince the brothers to let them join in.

The next day, they accompany the offering to the temple. Displeased with what has been presented before him, Ra kills Selatis. O'Neill, who wants to kill Ra now rather than wait 5000 years, is prevented by a reminder from Carter. Jackson suggests the Z.P.M. will be in the treasure room, so O'Neill zats a Jaffa for his Horus guard uniform, which Teal'c dons. Teal'c successfully breaches the treasure room and returns with the Z.P.M.

They return to the Jumper only to find it still cloaked, but partially outlined by sand from a recent storm – and surrounded by Jaffa. O'Neill wants to attack before reinforcements arrive, but Carter insists they can do nothing more to alter the time line.

Stranded, SG-1 reluctantly decides to wait until the human slaves rebel (which Jackson knows will happen eventually) and Ra leaves Earth. They can only hope to keep their impact to a minimum.

Jackson also suggests a way to get the Z.P.M. back to the future, even if SG-1 doesn't make it. A month before they left, an archaeological dig discovered a tomb near Giza. Placing the Z.P.M. in the tomb, along with the video camera, will ensure its future discovery.

Time passes, and history is made again.

Daniel, with different glasses and a different haircut, is teaching an English-as-a-second-language class when Air Force personnel approach him. At the Department of Aerospace Research in Washington, D.C., Sam, in glasses and a civilian outfit, is railing about a male colleague stealing her research when Paul Davis appears. O'Neill is on a fishing boat when Samuels comes to take him back to DC, but they are unable to convince him to go.

At the Cheyenne Mountain complex, the altered timeline Sam and Daniel meet for the first time. Brigadier General Hammond shows them a tape from a video camera discovered in a canopic jar at Giza. The recording, made by the trapped SG-1, was designed to help their future selves set the timeline aright. The Z.P.M. was with the video camera. Dr. Langford, who previously excavated the area did not find a Stargate, but he did discover a hieroglyphic tablet no one can translate. Hammond asks if Jackson would like to try.

According to the tablet, actually written by the trapped Jackson, in 2995 B.C. there was an uprising against Ra that forced him to leave. But Ra took the Stargate with him. Daniel learns that there's another Stargate on Earth, in Antarctica. Desperate to remain involved, Daniel and Sam try to convince O'Neill to help them. Again, he refuses.

Davis shows Sam and Daniel the recovered Jumper used by their trapped counterparts. He also introduces them to Dr. Rodney McKay, the lead scientist on the project. Sam asks if they have dialed the Stargate from the ship. McKay confirms that they have, but with negative results. Sam escapes McKay and proves herself the better scientist when she correlates seismic activity and the dialing attempts to pinpoint the location of the second Stargate at Earth's southern pole.

Despite their efforts, Sam and Daniel are dismissed from the project, just as the recovered Stargate is lowered into position in the Gate Room.