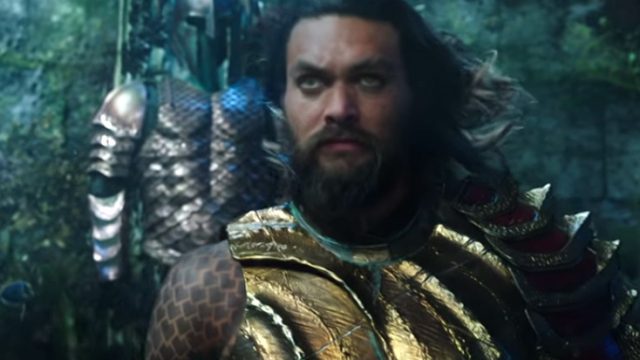 It has literally been years since Jason Momoa (Stargate’s Ronon Dex) was cast as Arthur Curry, a.k.a. Aquaman, destined to be a member of the Justice League and a cornerstone of the DC cinematic universe.

We’ve seen lots of behind-the-scenes photos from the filming of his solo film Aquaman, along with a steady stream of news about the cast, story elements, and last week’s movie poster. Now this weekend at San Diego Comic-Con Warner Bros. finally dropped the full trailer for the film, which hits theaters December 21.

The trailer dives into the two worlds Arthur inhabits, and takes viewers to the undersea kingdom of Atlantis — where the throne is under contention and, with it, the future of more than just the Atlantean people. It also shows off the classic comic villain Black Manta (Yahya Abdul-Mateen II).

It’s already garnered more than 15 million views in less than two days. Check it out below!

Momoa appeared on stage Saturday in the massive Hall H at San Diego Comic-Con, where the trailer made its debut before thousands of fans. Also appearing were co-stars Nicole Kidman, Amber Heard, Patrick Wilson, Abdul-Mateen, and director James Wan. The full, 17-minute segment is also below!

Wan describes the film less as a traditional superhero movie, and more of a science fiction / fantasy film.