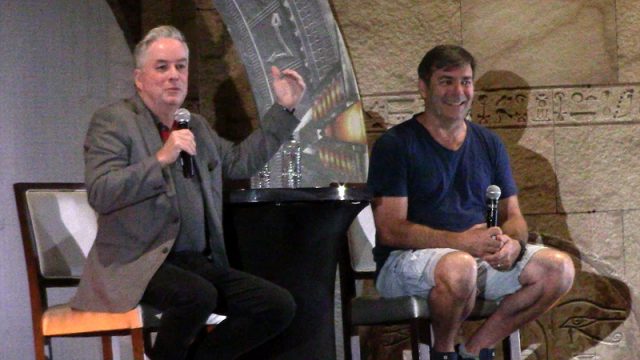 Brad Wright and Martin Wood on stage at Gatecon: The Invasion (2018)

Before Martin Wood became one of the Stargate franchise’s most prolific directors — with 76 episodes and a movie under his belt — he was a second-unit director trying to get his shot in the earliest days of Stargate SG-1.

Wood recalled his first encounter with series co-creator Brad Wright when the show’s first season was just getting going. Wood not only managed to get the boss’s attention, but also went on to direct two episodes in Season One. One was the clips-heavy bottle show “Politics,” which introduced Senator Kinsey (Ronny Cox). 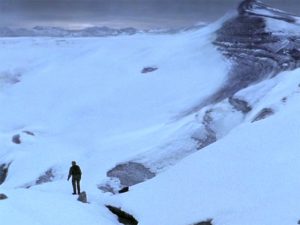 Captain Carter discovers she has nowhere to find help after gating into Antarctica. From “Solitudes”

The other was the fan-favorite hour “Solitudes,” which saw Jack O’Neill and Samantha Carter stuck together on an icy glacier, injured and unable to get home. Wright himself wrote the script.

The two friends reunited on stage at the Gatecon fan convention in Vancouver last month, and reminisced about the early days — joking that an episode that was supposed to be inexpensive entailed building a giant ice cave on set, and also renting a helicopter to fly a small crew up to a nearby glacier.

“I got to actually shoot as well as direct on that,” Wood recalled, “because the cameraman we took up with us was so air sick that he couldn’t shoot it. So I ended up actually shooting the stuff at the crevasse, when she comes up out and looks [around].

“There were four of us out there, and it was just the cheapest show we’ve ever done.”

Brad and Martin also talked about the final Stargate story they worked on together. Wright wrote, and Wood directed, the 2008 DVD movie Stargate: Continuum. That shoot entailed another icy excursion, this one all the way north on the Arctic ice flow. (It was the most northerly shoot in history.) 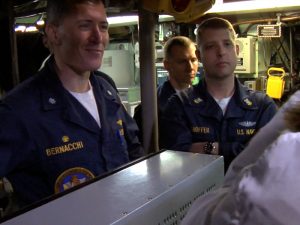 The crew of the U.S.S. Alexandria gets some screen time in 2008’s Stargate: Continuum.

With the support of the U.S. Navy Continuum included the rare opportunity to film a nuclear submarine surfacing through the Arctic ice. The Stargate crew also shot scenes on board the U.S.S. Alexandria itself.

Commander Mike Bernacchi, then captain of the boat, appeared in the movie as himself — along with a number of the sub’s actual crew.

“We had to ‘recon’ the submarine” prior to filming, Wood said, “and Brad and I got to go. And they actually asked Rick [Richard Dean Anderson] if he wanted to fire a fake torpedo. And we were like, ‘… Why does he get to fire the torpedo?!”

Watch the video below for more of their exchange straight from Gatecon! And subscribe to GateWorld’s YouTube channel for more from the fan event.

Stargate and Atlantis are my two most favorite shows ever, the makers of these two shows are brilliant to come up with these two fantastic shows. Thank you for hours of intertanment, however I’d didn’t much care that cam mitchel replacement Jack one’ll but I still watch it but Jack and carter made the show I always hoped they would get married it’s awesome that they keeled their love for each other at bay, very commendable.

I love watching Stargate SG1 when it first came on. Now they are playing reruns and I love it. I’m recording it so I can watch it when I want. Thank you for bringing back the reruns.

I love Stargate Sg1 and Atlantis. I have some dvds and I need more. I have none of Atlantis.

The bonus features on the DVD of Continuum are great, although I wish it contained more of the U.S.S. Alexandria crew. Not surprising is the actors/crew viewed the whole Artic trip in a positive light, the opposite from another crew encountering the same weather in a different movie.