Browse: Home / 2019 / June / New Stargate Collectibles And T-Shirts Are In The Works 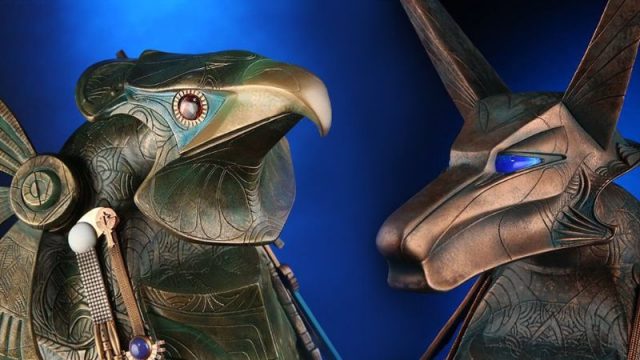 Stargate’s licensing looks to be on the upswing in 2019, with new and returning licensees announced this week.

As we reported yesterday, Wyvern Gaming will produce a brand new Stargate SG-1 tabletop roleplaying game. But buried in that press release is also news about more new Stargate collectible figures and T-shirts:

Beyond the Stargate Roleplaying Game, MGM and Brandgenuity continue to grow the Stargate SG-1 licensing program with recent products/partners including an upcoming fan convention from Creation Entertainment, collectible figures from Chronicle Collectibles, and tees from The Forecast Agency and American Classics.

Chronicle has previously put out high-quality Horus and Anubis guard busts (pictured above) at 1:1 and 1:2-scale, as well as a 1:2-scale Jaffa fossil replica, specific to the 1994 Stargate feature film. But this will be the company’s first time creating products specific to SG-1.

The previous line of SG-1 and Atlantis figures were produced by Diamond Select Toys between 2006 and 2008. 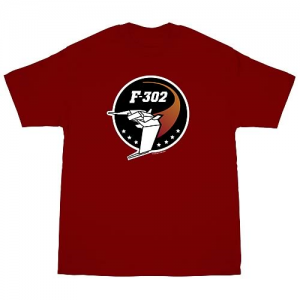 Finally, officially licensed T-shirts have been out there for many years, though they tend to fly under the radar with many fans. Entertainment Earth is currently selling six different designs from license manager Trevco, including the pretty rad F-302 logo pictured here.

According to the release MGM has enlisted Brandgenuity, a third-party brand licensing agency, to manage the development and roll out of the Stargate licensing program — meaning fans may well see additional announcements soon. (MGM also has its own consumer products division internally.)

We’re looking at you, Funko.

Active licenses for the Stargate brand has been fairly quiet in recent years. Fandemonium continues to publish SG-1 and Atlantis novels and novellas. And American Mythology recently wrapped its run of Atlantis and Stargate Universe comic books. (With no further issues yet announced, we aren’t sure whether American Mythology will continue with Stargate’s comic license.)

There’s no word yet on new licensed merchandise specific to Stargate Atlantis or SGU.

We have a line out to MGM for additional details on these and other upcoming items, so stay tuned to GateWorld for updates.

We are getting Stargate everything besides a long-form series. Brad Cooper and MGM: please, please, please make an announcement this year.

Well they have to test the market. The show was expensive at over 1mil each episode. So they have to make sure people want it before they make it. And what theyve been doing is the smart and safe path. If we try too soon it could fail

“Test the market”… Test what market? Those 6 countries who are the only ones with access to everything and beyond at Command? That’s 189 countries whose markets MGM has squandered. Or create a low-budget webseries, again access restricted to 6 countries whose fans can’t keep their mouth shut and spoil the entire film to kingdom come and then either hate it or love it (more hate than love). Only a digital release — they could start with putting that out on DVD (the only way I’ll pay to watch it) — with lots of extras. They’re not testing the market.… Read more »

Not sure that’s what they are doing. I mean, I can’t think of a show that “tested the market” in the way MGM is doing it now. Seems a bit limited. Anyway, the point of my message was just that I wanted to see a new show. Of course I am going to have to wait, I was just being cheeky about getting everything else except a show.

They have tested the market with a ridiculous attempt. A whole year has passed since then.

According to the American Mythology folks, they haven’t heard from MGM whether their license is still good for … since september so I’m guessing the answer is no.

I hoped the SG series would have made a comeback long ago as did many others. Does MGM need a go-fund-me page to make it happen ?

Can someone explain to me why MGM is not developing anything SG related in terms of TV? Unreal how they are missing the boat. Just losing money on this IP.

It’s quite possible that they’ve pitched networks, but haven’t gotten any bites yet. Fully financing an expensive, long form show all on their own is problematic for various reasons. To get a Stargate show on the air, they either need more time to grow their streaming plans/fledgling cable network, or they need an existing streaming service/network to agree to pay for most of the show’s cost in exchange for being able to air it there first.

while everyone likes to believe they are part of some great huge fandom, Stargate fandom is not that huge and at this point the studios will have to start from scratch to sell it to the public to get enough interest to make a profit.