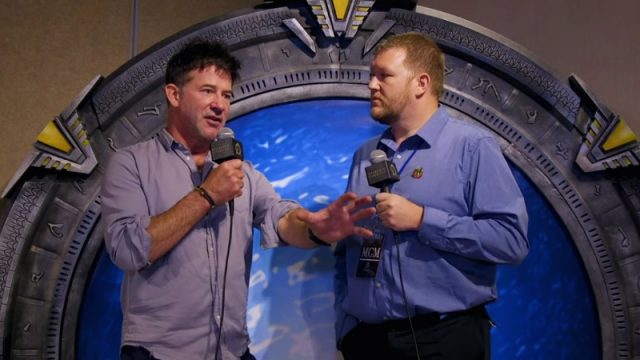 The cast of Stargate Atlantis knew in 2004 that they were joining an established science fiction franchise with a long history. They knew there was a built-in fan base for the spin-off when it premiered in July of 2004.

But actor Joe Flanigan (“John Sheppard”) was still unprepared for the response from fans — particularly when thousands of them showed up to the Stargate panel at San Diego Comic-Con that summer. He talked about the experience in a new interview with MGM’s official platform, Stargate Command.

“When we went to Comic Con the first time … oh my God, I think only one episode had aired,” the actor said. “And I was like, ‘Why are we going to Comic Con? This is like a waste of time.’ Our ratings were really high and we broke a bunch of records, but I didn’t think we were gonna walk down there and there’s gonna be five thousand people in a room! 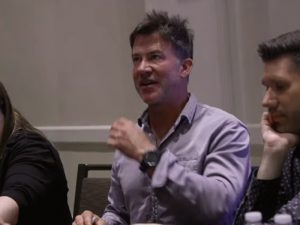 Flanigan appeared at Creation Entertainment’s Gateway fan convention in the Chicago area this past June.

“Let’s be real,” he said — “the show would never have enjoyed that type of immediate success without SG-1. I mean the audience was already there. And although they had trepidations, once they realized it was in the spirit of Stargate they embraced it, and then that was that.”

Flanigan also talked about first approaching his character, and the early worries that Sheppard would end up being too much like Richard Dean Anderson’s Jack O’Neill. He said that he didn’t watch SG-1 as a result — at least at first — so that the O’Neill character would not influence his own performance as the spin-off’s leading man.

“I actually had a very strong idea of what I wanted the character to do,” he said, “and it just felt natural. It felt pretty easy.”

Watch Joe’s full comments in the short interview video below!

Transcripts of Stargate Command’s other short interviews from Gateway — Connor Trinneer, Tony Amendola, and Dan Payne — are available on the official Web site. (Videos are available to All Access Pass subscribers.)

Wesley Snipes should be team lesder

At age 57 he might make a good Hammond-type character.