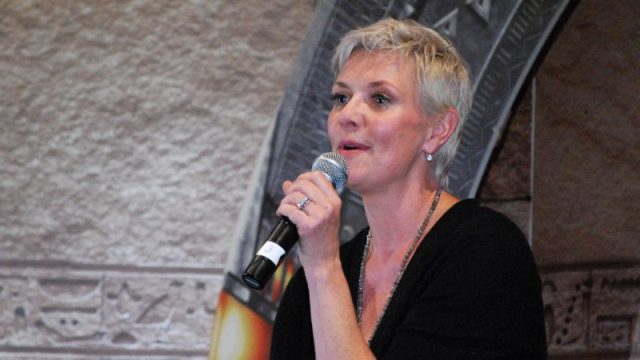 Tickets for Gatecon went on sale September 28, and the “Ancients” and “Furling” package levels sold out within a day. The “Asgard” and “Nox” tiers are still available, including a reserved seat in the auditorium and plenty of extras.

Tapping, of course, played Samantha Carter on Stargate SG-1 for ten seasons and two films. She then crossed over as a series regular for one year on Stargate Atlantis, before making a handful of guest appearances on Stargate Universe. 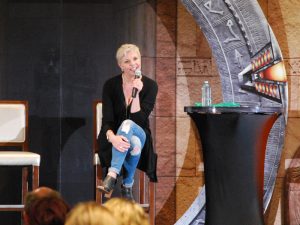 Amanda appears on stage at Gatecon in September, 2018.

The “Queen of Science Fiction” has also appeared on Sanctuary (which she executive produced), Supernatural, and Travelers. She spends most of her time today in the director’s chair, racking up more than 50 credits including Van Helsing, Blindspot, and The 100.

The twentieth anniversary convention will feature lots of stage events, photo ops and autographs, plus a costume competition (this year’s theme is “Steampunk Stargate”), charity banquet and auction, dealer’s room, and more.

Read more about Gatecon and other upcoming Stargate fan events on GateWorld’s new Conventions page. And check out our sit-down interview with Amanda from Gatecon in 2018!

Not from what has been going around. He only attends the ones he gets along with or likes. You can tell the Cons he likes because it’s the ones he returns to. Didn’t like it, dosent go back. Fans wanting him is irrelevant.