Amanda Tapping has revealed that she is directing an episode of The CW’s hit show Batwoman. Adding another credit to an impressive – and quickly growing – portfolio, Amanda said she had started preparations for her latest project.

“Day one of prep,” Tapping wrote on Instagram. “Yes, I saw the bat cave! Yes, I freaked out! Subtly, of course.” 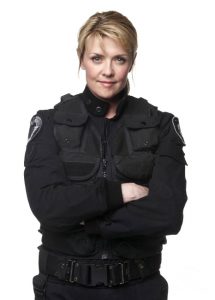 Tapping played Samantha Carter on Stargate SG-1, and made her directorial debut in the show’s seventh season.

Based on the DC Comics character of the same name, Batwoman is set in producer Greg Berlanti’s “Arrowverse” and follows vigilante Kate Kane as she battles her demons in Gotham City. The show is currently filming its first season in Vancouver. The CW renewed the series for a second season in January 2020.

This is Amanda’s second venture in the DC television universe. She announced this month that she was directing an upcoming episode of The Flash.

She has previously directed for The CW’s Supernatural and The 100. Tapping has also recently directed an episode of Chilling Adventures of Sabrina for Netflix.

New episodes of Batwoman air Sundays (9/8c) on The CW in the United States.

Sadly, I doubt Amanda can overcome the poor writing on this show. If they catch and release the main villain one more time I’m done with it.

New blood could be good for the series, no doubt there… we need something to perk it up and while I have seen mrs Tapping as an actress, I have yet to see one of her directing projects. While Alice was interesting, a change of villain or something attached to the bat family could be the « hoomph »
Batwoman needs.

Is it all that accurate to say ‘impressive and quickly growing portfolio?’ I feel like Amanda (& many other cast from stargate sg1/ Atlantis) didn’t get as much success or roles as they deserved after Stargate fizzled out. Since Sanctuary ended in 2011 Amanda’s roles seem to be quite intermittent and they’re mostly small side character roles as far as I can tell. Similar stories with much of the SG actors, with the exception of Jason Momoa who went on to huge success with very big roles. Tapping deserved better than this, and I think the same for others –… Read more »

Well, Amanda has very deliberately focused her career since Sanctuary on directing. Her resume here over the last decade is certainly impressive, and she’s now getting invitations to work on bigger network shows.

My sense of the acting side of her work over the past decade is that she’ll take a role when it is interesting or she has a personal connection — as when she took on a recurring part on screen in Brad Wright’s Travelers (in addition to directing).