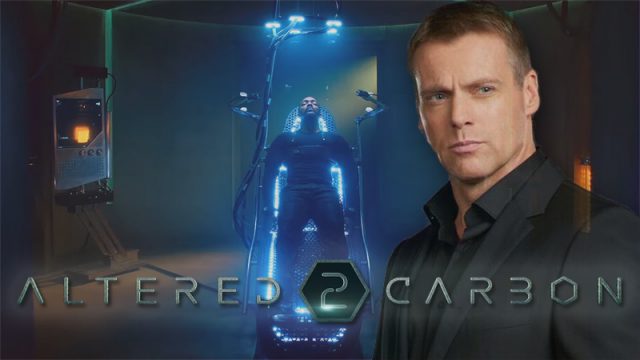 As we reported last year Stargate’s own Michael Shanks is set to make an appearance in the upcoming season of Netflix’s Altered Carbon — set for streaming in just a couple of weeks. Today Netflix released the full trailer for Season Two of the sci-fi drama, with Shanks himself heard in the opening moments.

The series is based on the books by Richard K. Morgan, set in a dystopian future where humans have achieved a sort of perverse immortality by backing up their minds to a “stack” — a piece of technology embedded in their head, which upon the body’s death can be transferred to a new body. 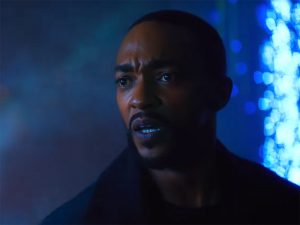 Anthony Mackie (Falcon in the Marvel Cinematic Universe) takes over the lead role of Takeshi Kovacs, played in the first season by Joel Kinnaman. As the lone survivor of a group of elite interstellar soldiers, Kovacs continues his centuries-old search for his lost love.

Shanks’ character on the show can be heard speaking over the first part of the trailer. The character’s identity and the extent of his role in the new season is still a mystery — but his dialogue in the trailer does offer some clues:

I crossed the stars in a colony ship before stacks were invented.

I left a dying Earth behind to seed a new world.

Mr. Kovacs. I know what you dream of.

Bespoke designe by Khumalo Bioware. Military use only. Rapid healing, enhanced reaction time. Among other bells and whistles …

Shanks’ character seems to be giving Kovacs the run-down on his new body (or “sleeve”), including the unique abilities with which it has been engineered. This suggests he will show up early in the season (probably Episode 1), perhaps as a scientist or a new, wealthy benefactor. The character’s suggestion that he is very old would seem to support the latter theory.

Season Two of Altered Carbon arrives on Netflix on February 27. While you get busy watching (or rewatching) Season One, check out the episode guide on our sister site, SciFi Stream!

The trailer below includes two significant plot SPOILERS! The first 30 seconds will give you all of Shanks’ dialogue. Proceed from there with caution.

Clearly he’s playing Daniel Jackson, it’s all there in the dialogue. Quest also checks out.

It was like a Stargate reunion, I saw 5 different Stargate actors. I will have to watch again to see if there was more.