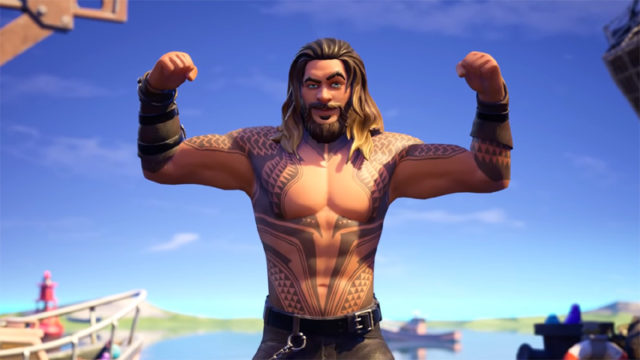 Well, technically the character you can play is Aquaman — featured in DC and Warner Bros. theatrical films Justice League (2017) and Aquaman (2019) — as part of the game’s new water-themed “Summer Splash” event. Momoa plays the role in the DC cinematic universe, and his Fortnite counterpart has been designed with his signature leonine likeness — including his tattoos.

If you squint hard enough, you can pretend that you’re playing as the Satedan warrior Ronon Dex.

Take a peek at the promo video below. 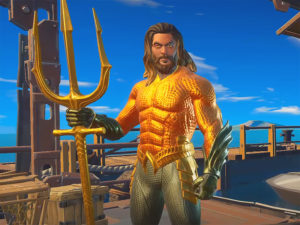 Although the game is free to play, Aquaman (along with his shirtless “beach ready” alter ego, Arthur Curry) is available as part of the new Season 3 Battle Pass (now through August 26). That’ll run you 950 V-Bucks (£7.50 / $9.50), Fortnite‘s in-game currency. Players then have to unlock the character skin (complete with his trident) by completing a handful of in-game tasks — one challenge per week, over a total of five weeks.

Just be prepared to get pwned by the kids, newb.

Fortnite is an online battle royale, where 100 people go player-versus-player in a large, open world combat arena. Players skydive onto an island and must scavenge for weapons and gear to go up against other players on the map. You can also team up with one or two friends, and the last player or team left alive wins the match.

To give non-gamers some perspective on just how big the Fortnite phenomenon is: the Battle Royale game mode has registered more than 350 million player accounts and reportedly pulls in millions of dollars every month for Epic. It’s won numerous gaming awards since it was first released in 2017, and is fully embedded in the cultural Zeitgeist — with somewhere around 50 million views logged worldwide for the first season’s surprise, black hole ending.

In other Unexpected Momoa news: Today is was reported that actor will voice none other than the legendary children’s icon Frosty the Snowman. The part comes in a hybrid live-action/CG film, to be written for Warner Bros. and Stampede Ventures by Elf scribe David Berenbaum.

Momoa will also produce the picture along with Stampede’s Jon Berg and Greg Silverman, and DC legend Geoff Johns.

“From his role as a fearsome count in a land of ice and fire to the oceanic success we all had with Aquaman, it felt only right to realize Jason this time out of snow,” Berg said.

“We know Jason’s as a true human being filled with love, compassion and a deep connection to ohana — all of which is the living spirit of Xmas and Frosty,” Silverman added.

No target release window has been announced for the film.