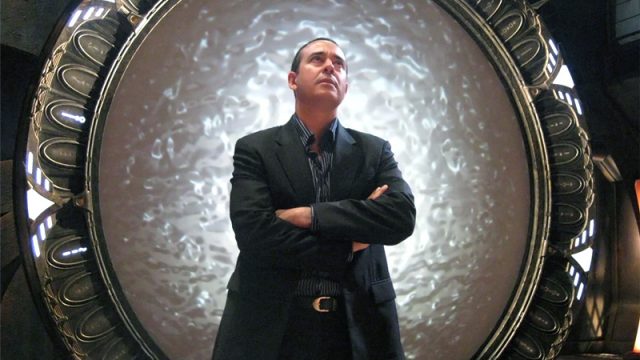 Joseph Mallozzi on the set of Stargate Universe

A brand new Stargate podcast is coming to your ear holes, and it’s hosted by a member of the SG-1, Atlantis, and Universe writers room.

The Companion announced today that Stargate writer and executive producer Joseph Mallozzi will host “Gaters Gonna Rate,” an ongoing audio series that asks fans to vote for the best of Stargate.

Here’s how The Companion describes the premise for the podcast:

Gaters Gonna Rate with Joseph Mallozzi gives Stargate fans the chance to make their voices heard by voting for their favorite episodes, characters, space battles, weapons and more. Every episode Mallozzi and his Companion co-host count down the top five, discussing and debating the picks with unrivalled detail and first-hand insight. They’ll then be joined by a special guest who played a crucial role in making this moment of small-screen magic to unveil the winner.

“What was Stargate’s greatest AU episode? Its most controversial character decision? Teal’c’s best ‘Indeed?'” Mallozzi said. “I have my opinion but, as always, I want to hear what the fans think. And I look forward to finding out, reflecting back, and debating the choices with the gang at The Companion on this new Stargate-themed podcast.”

“Gaters Gonna Rate” will be available free to listeners, with fans able to vote on each topic on The Companion Web site. Only subscribers to The Companion will have access to contribute comments that might be featured on the show. Members will also get new episodes two weeks before the general public.

The podcast will premiere in mid-February, and for the debut topic Mallozzi and The Companion are inviting Stargate fans to vote on their favorite hand-to-hand combat scene from the Stargate saga.

Mallozzi joined the Stargate production team in 2000 for the fourth season of Stargate SG-1, and has been active among the show’s online fan base ever since. He was eventually promoted to executive producer, and worked as showrunner (with Paul Mullie) on the fourth and fifth seasons of Stargate Atlantis.

After Stargate he co-created Dark Matter for Syfy Channel, and later worked as an executive producer on Hulu’s Utopia Falls. In addition to the new podcast (and monthly appearances on GateWorld’s own “Dial the Gate” livestreaming show) he is currently writing a TV adaptation of Brian McClellan’s fantasy book series Powder Mage.

For more on The Companion or to sign up for a free trial of the subscription service head to TheCompanion.app.

This might not be the best possible name for the podcast. It could lead to some confusion due to other groups being described as “gaters”.

Did a quick bit of research on The Companion website — TOS, PP & FAQ…

Membership is 70$ a year if you like to subscribe as a member. Available for iOS and Android. Worldwide availability.

You don’t have to be a member to listen to the podcasts (like Darren mentions in the article) but you’ll have to wait 2 weeks, and have no access to the comment section. Voting is open to all (the pool would otherwise be too small, I reckon).

The Companion is registered as a company in the UK. It’s a British concept build with Kickstarter funds.