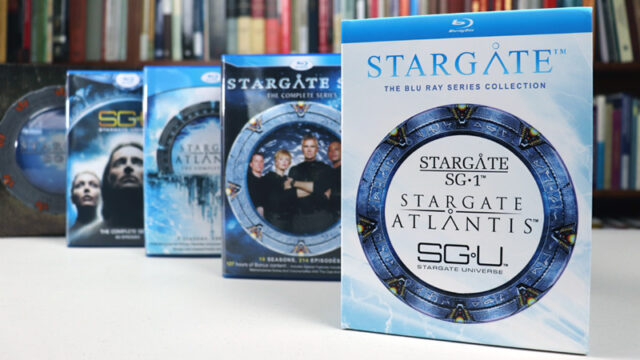 We finally have all three Stargate series on Blu-ray disc with a high-definition picture, and so far our initial look is encouraging. The packaging is (mostly) well put-together, the bonus features are (almost) all here, and the early seasons of Stargate SG-1 look more crisp and clear than ever before.

“Stargate: The Blu Ray Series Collection” comes from Visual Entertainment Inc., which has just finished putting out budget-friendly editions of SG-1, Stargate Atlantis, and Stargate Universe on both Blu-ray and DVD formats. Fans can buy each series individually — or take the plunge like I did, and buy the complete collection in one box.

For Stargate SG-1, it’s actually the show’s very first appearance on Blu-ray disc — now more than 13 years after the series ended. Atlantis has seen a Blu-ray release, but Stargate Universe only received an HD release for its first season. So this Blu-ray collection is long overdue.

In this video we’re unboxing the Blu-ray collection straight from VEI. The video below runs about 30 minutes. We’ll spend about 18 minutes pulling apart the Blu-ray collection, then turn to compare it with the previous DVD releases — including a look inside the Stagate SG-1 Collector’s Edition gold box.

You can read more about VEI’s Blu-ray release of Stargate SG-1 here.

The bottom line: Despite some disappointing cover art for Stargate SG-1 — including a rather poorly Photoshopped Stargate image — the packaging for the complete collection is quite good. The keep cases for each series are slim and sturdy, and close with a satisfying snap. 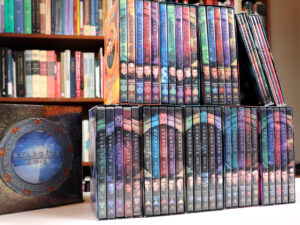 Past collections of Stargate SG-1 on DVD are large enough to fill a Goa’uld cargo ship.

Inside the discs are held in clear-sleeve jackets. This has a big advantage over previous releases of Stargate SG-1 on home media, which didn’t list episode titles on the face of each disc. The 2007 Collector’s Edition is especially unwieldy, with a fold-out accordian design and the discs hidden in overlapping pockets.

I’m really pleased with the packaging and presentation in this collection. They take up less space on my shelf, and are vastly more usable than my Stargate DVD sets.

But what’s on the discs? How do these episodes look … especially those upscaled copies of Stargate SG-1? In an upcoming video we’ll dig into the discs themselves and show you side-by-side comparisons of HD Stargate with the old, standard-definition releases.

Be sure to subscribe to GateWorld on YouTube and follow us on Twitter to see that and all the latest Stargate news and features! Meanwhile you can order all three Stargate TV series on Blu-ray disc now from Amazon:

GateWorld receives a commission on purchases made through our Amazon links. Thank you for supporting independent fan journalism! 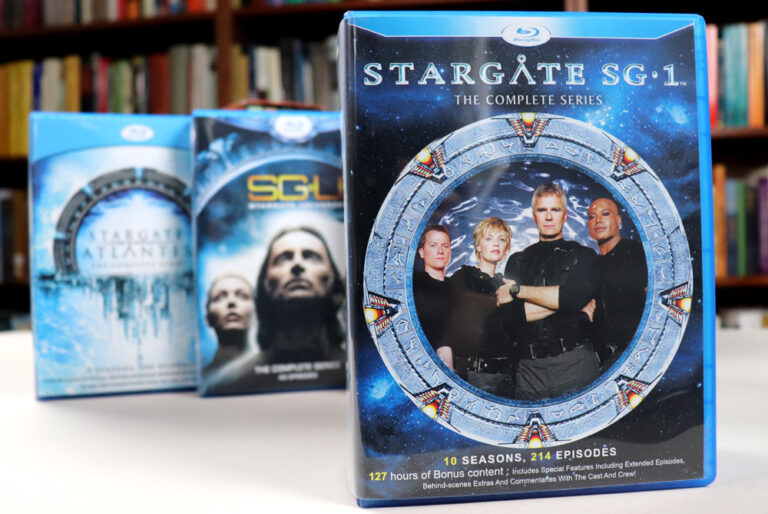 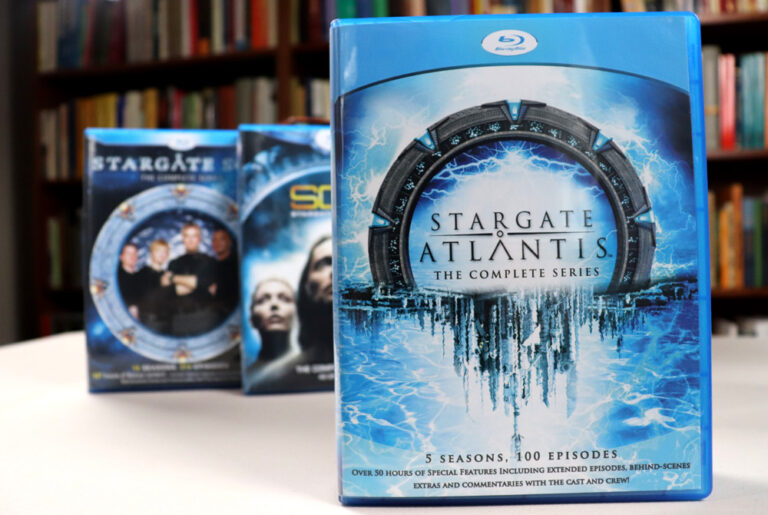 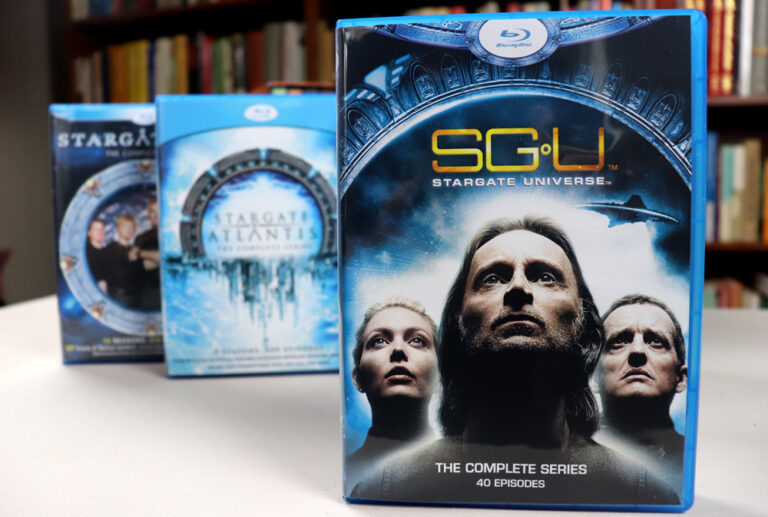 Thanks for taking the plunge and doing the evaluations.
My first questions for your review will be:
1) What is the definitive answer concerning the audio mix for SG-1? 5.1 or 2.0 or 5.1 with horrible mixing?
2) Do you feel that Season 2 of SGU is a legit HD transfer, or do you think they upscaled the DVD version with NR? I was soooo annoyed when I could only buy the DVD of S2.

These are great questions, Brent, and I will see what I can do. I’ll be focusing on the SG-1 upscaling in the next video. (I probably won’t be the one to do a “definitive” review with regard to sound, though, as I don’t have my 5.1 hooked up right now.) When we do get to Atlantis and SGU I will be looking for signs that VEI started with true 1080p source material, and didn’t do something foolish like upscale the DVDs. I can’t imagine such a thing could possibly happen … but then I also couldn’t imagine someone could be… Read more »

Hi,
Do you know if there are, or will be, any options for European fans? There are no options as far as I can tell. But maybe I have overseen something.
Thank u so much for updating us :)

No news on a new European release yet, unfortunately. We have reached out to VEI multiple times and not gotten any response.

SG-1 is $139.99 by itself. One reason I ended up going for the whole kit and kaboodle is that I don’t own SGU on physical media, and my SGA DVDs were in need of replacing.

Hi ! Thanks for your work ! I’ll wait for your review about the quality of the transfert before making my choice. By any chance, do you know if there are any others subtitles (like French one :P) than just english in this version ?

I was going to ask something similar – are all the episodes captioned? I seem to recall that on previous DVD releases, only about half the SG-1 seasons were captioned, which is why I didn’t buy any.

I haven’t checked every disc, but what I did look at (“Menace”) has English subtitles. No closed captions, and no other language tracks.

Thanks for this first-look at these sets. Helps us make an informed decision when considering to make the purchase. One pet peeve of mine is the cover picture on the SG1 set. Why in the world would they put a picture of the team with Jonas instead of Daniel? Makes no sense considering Daniel was one of the first characters in the entire franchise up to the end, whereas Jonas was in a little over a season worth of episodes. Seems to me the people who created this are not familiar with its content. Another example of a money making… Read more »

Is the terrible SG-1 cover sleeve removable if someone were to make a better fan-edit?

Are these region free?

Another YouTuber stated that the SG-1 Blu-rays at least are not region locked. But I can’t confirm.

Ok. Thanks for telling me. Still hope for an European release though.