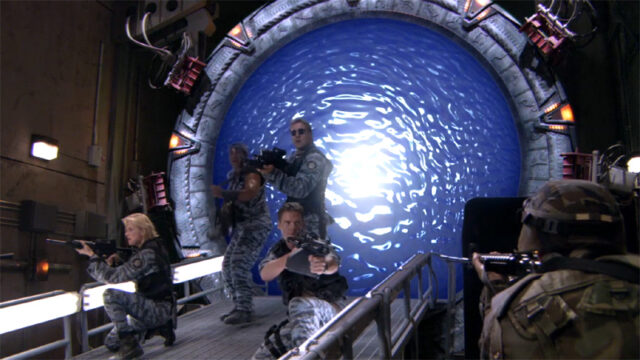 Tech behemoth Amazon is the latest suitor interested in purchasing Metro-Goldwyn-Mayer, the Hollywood studio that owns the Stargate franchise.

The Information reports and Variety confirms through its own sources that Amazon is weeks into negotiations to purchase the historic studio, for a price tag said to be around $9 billion. Both companies have so far declined to comment.

That means that new projects in the Stargate franchise could eventually find their way to Prime Video, Amazon’s digital streaming service.

MGM is a hot commodity in the new digital streaming gold rush, given the depth of its TV and film library and the variety of IPs (intellectual property) owned by the studio — around 4,000 titles and 17,000 hours of film and television content. In addition to Stargate, MGM’s television arm produces Vikings (for History Channel), The Handmaid’s Tale (for Hulu), Fargo (for FX), and numerous unscripted series such as The Voice, Survivor, and Shark Tank.

On the film side, MGM owns or has significant interest in franchises such as James Bond, Rocky and Creed, Legally Blonde, RoboCop, the Pink Panther, and The Hobbit. The studio also owns the premium cable channel Epix.

Trade publications reported in December that MGM was soliciting offers, formally enlisting a pair of investment banks — Morgan Stanley and LionTree LLC — to advise the company as it explores a potential sale. This followed on the heels of earlier reports that another tech giant, Apple, was in talks to buy the company.

Given that MGM has recently been valued between $5 billion and $6 billion, the high-dollar offer may be a flex on Amazon’s part — both to fend off other buyers and to demonstrate how serious the company is to pick up MGM’s IP-rich film and television library.

It’s also worth noting the common industry speculation that MGM’s board has essentially been working toward the goal of selling the studio since it emerged from bankruptcy more than a decade ago. As the company fell into the hands of is creditors, the intentions were to build back MGM’s value so that they could recoup their investment.

The company’s largest shareholder is Anchorage Capital, whose head Kevin Ulrich runs MGM’s board of directors. Ulrich himself is said to be involved in direct negotiations with Amazon Studios and Prime Video senior VP Mike Hopkins.

Former MGM board chairman Gary Barber was ousted in 2018, reportedly for entering into unsanctioned negotiations with Apple to sell MGM for around $6 billion. The Wall Street Journal reported that Ulrich urged investors at the time to stay the course, saying that in another two to three years he could sell the studio for more than $8 billion.

Given that history, it’s hard to imagine the company’s board passing on a $9 billion offer today. In the intervening years the film business has obviously struggled under COVID lockdown, with MGM’s tentpole James Bond film No Time to Die delayed multiple times. The theatrical release has been pushed once again — to October 8, 2021 — and MGM is hoping for earnings north of $1 billion. 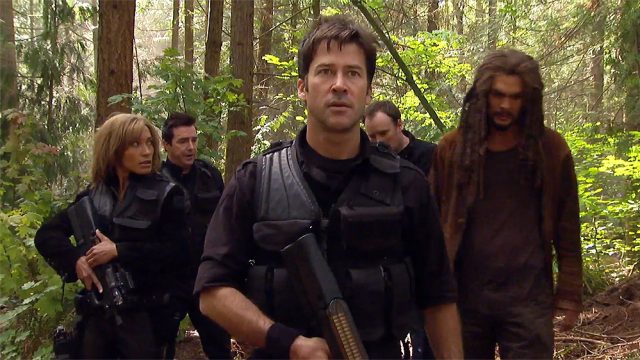 The Stargate franchise has been in a holding pattern for three years now, since the Web series Stargate Origins premiered on MGM’s now defunct platform Stargate Command. Brad Wright, who co-created all three live-action TV series in the franchise, has been trying to get a fourth series off the ground since early 2019.

While the potential sale of the studio certainly would not prevent MGM from inking a deal and putting a new show into production now, it could be a factor. Not having the Stargate brand already committed to another outlet could be one more piece in favorable negotiations.

Because MGM produces numerous scripted and nonscripted TV series for various outlets, a purchase by Amazon does not mean that its output would immediately be funneled to Amazon Prime. But with Amazon looking to grow its content offerings and subscriber base, it would be the most logical home for a new Stargate series.

With the prominence of online streaming today, Amazon Prime Video could give a new Stargate series a prominent spot in front of consumers. Amazon has more than 200 million Prime members worldwide, and has stated that 175 million of those streamed Prime Video content in the last year. 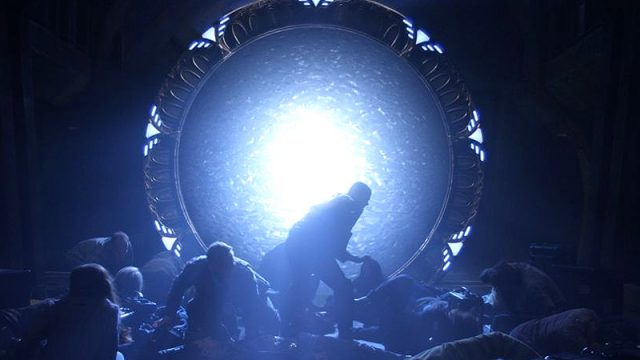 And while MGM is a relatively small studio in comparison to media conglomerates like Disney and WarnerMedia, tech and media companies like Amazon, Apple, and Netflix have deep pockets. Because these companies are looking to grab market share in the still young streaming sector, right now they are spending big on content. Amazon spent $11 billion on TV, movies, and music for Prime services in 2020 — an increase of 41 percent over the previous year, according to Variety.

On the fantasy front, Amazon has made a major investment in a new series set in the Lord of the Rings‘ Middle Earth — at an astonishing cost of $465 million, just to build out the world for the first season. But Amazon’s original science fiction offerings have heretofor been slim, or low-profile acquisitions. The one exception to this is The Expanse, which Amazon acquired after the show was cancelled by Syfy Channel. Next year’s sixth season, however, is reportedly the last for the critically acclaimed series (at least for the time being).

2022 may be just the year to revive another big science fiction universe with a built-in, global audience. Stargate fans are more than ready.

We’ll continue to monitor MGM’s status and what it may portend for the Stargate franchise. Keep your browser locked on GateWorld for the very latest.

Thanks to Adam, MacLean, Marci, and Platschu for the tip!

Putting bias for Stargate aside it would be a good fit for Amazon. The general Stargate concept is a plot generating device in itself. Amazon would not need to spend as much as say Lord Of The Rings to produce it.(Even at that lower cost it will still be more than what was spent on SG1 etc) SFX have gotten 10 time better and cheaper so it would look great and Amazon is well suited to exploit any merchandising potential . Brad Wright is a proven produce to expand the franchise

Well Stargate needs a full reboot in my book. Darker, scarier, more like the movie. No lame Jack sarcasm. Definitely not film it in Vancouver so every planet doesn’t look like Canada in winter.

Actually, I couldn’t disagree more. Part of the charm of the tv shows was the humorous banter between the cast members. It separated it from all the different Scifi shows that have come out being “darker, scarier….” and may I add dystopian. I hope they keep the ethos of SG1 and Atlantis.

I do agree about the don’t film, only in Vancouver, part.

That’s unfair. That means I can’t watch it in my country. I recently got Prime, but had to cancel it right away because everything on it said unavailable so there was no play button on anything. I’m sick and tired of this unfair treatment. :(

Per-country rights can vary a lot, but I have to think that Amazon-owned shows meant to be showcases for Prime wouldn’t have a problem. The only reason they would be is if Amazon chose to sell rights to a competitor for some region.

Were you trying to access Prime Video content via your region’s Amazon retail website? — I believe in some regions Prime Video may require users to access it through a separate site: primevideo.com — did you try that?

We definitely need more of the same like SG-1 and Atlantis and preferably a continuation, not a reboot. Al Dunlop how can you say that Jacks’s sarcasm was lame? Sacrilege! It was one of the best elements of the show made it all the more worth watching. As far as Stargate concerns me, I always loved the series, not the movie. The movie was and still is, for me, just a necessary, but otherwise completely disregardable starting point of a wonderful universe brought to life by Brad Wright, Robert C. Cooper, Jonathan Glassner, Joseph Mallozzi and Paul Mullie. The only… Read more »

Not sure how to feel about this. I have a feeling that Amazon purchasing MGM might eventually result in a version Stargate that we don’t really want. Hope I’m wrong.

FINALLY THEY SELL!!!! they have done nothing with STARGATE for FAR too long , we need a new owner with deep pockets….but they did only give the expanse 3 seasons after picking them up

If Amazon acquires MGM I hope the new series or films or whatever format we’re going to see the new Stargate in won’t be a Roland Emmerich and Dean Devlin production. Those two ##### are trying to get their dirty mitts on a property they sold almost 30 years ago now that they see that it can be a potential for virtually endless money making. They claim they have a new “vision” for Stargate that somehow they couldn’t see all those years ago. Yeah, a vision of dollar bills filling their bottomless pockets. On the other hand I wonder if… Read more »

pretty sure they will. stargate IS a giant inb followings really, and THAT is what sells. it will be a draw item for them for sure.

Whatever they end up doing, let’s hope it’s nothing like Origins. What a mess THAT was.

With Amazon wouldn’t we be limited to something like 3 seasons with approx. 10 episodes only?

far better than what we have right now.
Plus, given how many people sign on to watch the spinoffs, it is something that can be pulled out and dusted off more often.

Looks like the deal is done. I think Amazon was just tired of fans complaining when Stargate left Prime 😃

According to this article, it’s a done deal for $8.45 B
https://www.necn.com/entertainment/entertainment-news/amazon-to-buy-mgm-studio-behind-james-bond-for-8-45-billion/2474132/

Oh boy… I don’t like this one bit. If they make another Stargate series, it better not be the SJW kind they hinted at 3 years ago… Or worse… I don’t want to see “strong female characters” who are black-latino-martian lesbians who use feminism in their “jokes”… And the funny thing is, they keep forgetting that SG-1 had one main female characters who was really strong since the late 90s: Sam Carter.
Please just let it go…

I think you need to let it go. I’m so tired of right-wingers bringing their “culture war” nonsense into SG fandom. Nobody cares about “SJWs” or “Wokeness” or whatever utterly meaningless buzzwords the right love to invent to divide and exclude people. Let. It. Go.

Stargate is dead. Why desecrate a corpse so hard?

The purchase has now gone through Amazon owns MGM. Fingers crossed for a greenlit forth series

Have they gotten approval from regulators in US, Europe and elsewhere yet?