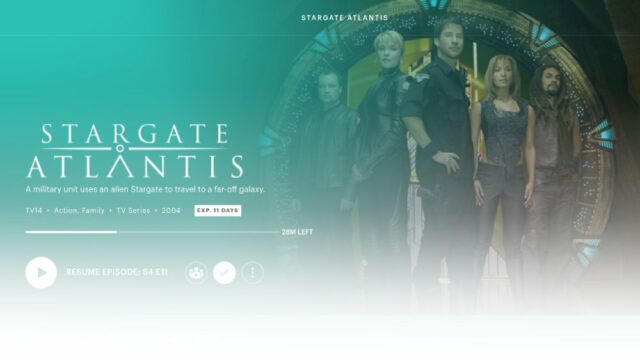 UPDATE! As of September 28 the shows are no longer listed for removal from Hulu, indicating a last-minute license extension. Keep enjoying your binge!

If you’ve been enjoying the Stargate TV franchise on Hulu in the United States … well, this isn’t good news. You have about a week and a half left to finish your binge viewing.

For now Netflix subscribers can switch over and pick up Stargate SG-1 there. But Atlantis and SGU are not currently on any other streaming services in the U.S. (The shows are available on Bluray and DVD.)

The Stargate series tend to come and go from the big streamers every few months, as their licensing deals with MGM either expire or get renewed (sometimes at the last minute).

But in this case, there’s a good chance that Stargate won’t be coming back to Hulu. That’s because franchise owner Metro-Goldwyn-Mayer is in the process of being purchased by one of Hulu’s competitors in the streaming market: Amazon. The retail behemoth has announced it is acquiring MGM for $8.45 billion, specifically to boost its Prime Video streaming service with MGM’s library of film and television IP. 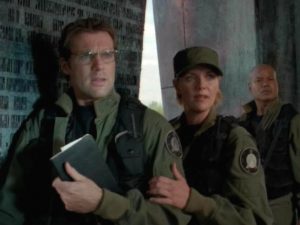 U.S. viewers can switch over to Netflix to continue streaming Stargate SG-1 next month.

In the long term that will hopefully result in a brand new Stargate series. But in the short term, it means that SG-1, Atlantis, and SGU are likely to return to Prime — and to become Prime exclusives.

That’s not likely to happen until the sale is complete, which is looking unlikely for 2021. Amazon and MGM have to get the sale approved by regulators before Amazon formally owns Stargate. But, in the meantime, MGM could give a short-term streaming license to Amazon. Or they could renew Hulu’s license for that matter, though that makes less sense in the final months before the Amazon sale closes.

In short: Get your Hulu binge done fast, because Stargate is leaving the service at the end of the month. It will probably be an Amazon Prime exclusive in 2022, or when the existing SG-1 deal with Netflix expires.

Meanwhile you can always keep up on where the Stargate shows and movies are streaming on GateWorld’s updated Where To Watch page.

GateWorld earns a commission on sales through our Amazon affiliate links. Thank you for supporting independent fan journalism!

In Australia we are lucky to have all three series on Stan. But after the Amazon + MGM deal goes through i’m worried it will go straight to Prime Videos which will suck.

SG-1 is and has been on a Free Over the Air channel called COMET for years, you need a HDTV antenna to get it, check Walmart ($30-$60) for one. They air 3 episodes a day M-F., they have several other sci-fi shows too.

Yes, Comet has it because I believe it’s an MGM-owned network and Brad Wright’s The Outer Limits show as well. The only thing bad about Comet (other than the terrible picture quality if you own a big tv) is their ridiculously long commercial breaks which lead them to cutting scenes out of each episode – they cut out the best scenes of Continuum which really irked me. I don’t actually think the current Stargate shows will necessarily be an exclusive when the MGM sale to Amazon is finalized. Not an Amazon exec myself but I don’t see what they would… Read more »

Update: unfortunately it appears after this week, Comet will no longer be airing SG-1 because it’s not showing on their schedule anymore. Maybe they finally took all the complaints from non-fans to heart or maybe they’re just looking to branch out, who knows.

Hopefully that means we can get a new streaming service that will stream the HD version of SG1(like Amazon always did). Last time I checked HULU, the first seasons were in the original 4:3 format in Standard Definition. It was hard to watch. Considering there are HD versions for the first seasons, I have no idea why a streaming service would choose to use the low-res version. Must have been a reduced price from MGM or something.

It looks like Stargate SG-1 will not be on Comet after September. According to the 2 week future schedule the last day that SG-1 will be shown on Comet is Wed. Sept.29th (they will air the last SG-1 episode Unending). SG-1 is not listed on the schedule after the 29th. I assume that Stargate will be back on Amazon on the 30th of Sept.

I was just coming here to post this too. For some reason they’re jumping straight to season 10 this week and then it’s not on the schedule at all. I don’t think the pending sale to Amazon has anything to do with it, for one, that sale won’t be finalized till at least the end of this year. For another, even if it were sold, Comet is a channel owned by Sinclair which is owned by MGM so Comet wouldn’t lose the rights to air it even after the sale. They must be pulling it for another reason. Unfortunately, every… Read more »

I don’t see a way to edit my earlier comment so I’m going to reply here to say I was mistaken, according to the CordCutters website and MGM Television Wiki page, MGM doesn’t own Comet or Sinclair but it operates and does the programming for Comet (why Stargate and The Outer Limits, both MGM shows, air on the network). But the sale still hasn’t gone through yet and wouldn’t be the reason why SG-1 is leaving Comet at this time.

Stargate is on Netflix as well.

Great news! If I’m correct, all the Stargates seem no longer to be leaving Hulu on 10/1. As of tonight (Tue., Sept 28), Hulu no longer displays the small white “Expiring in x days” box on each of the series’ images, nor do any of them continue to appear in /My Stuff/Expiring. Likely the licensing got renewed last minute, as happened a few years ago IIRC. No hard confirmations, but per comments today in the r/Stargate subreddit, others are seeing it as well.

Actually it hasn’t shown as leaving Hulu for a couple days now.