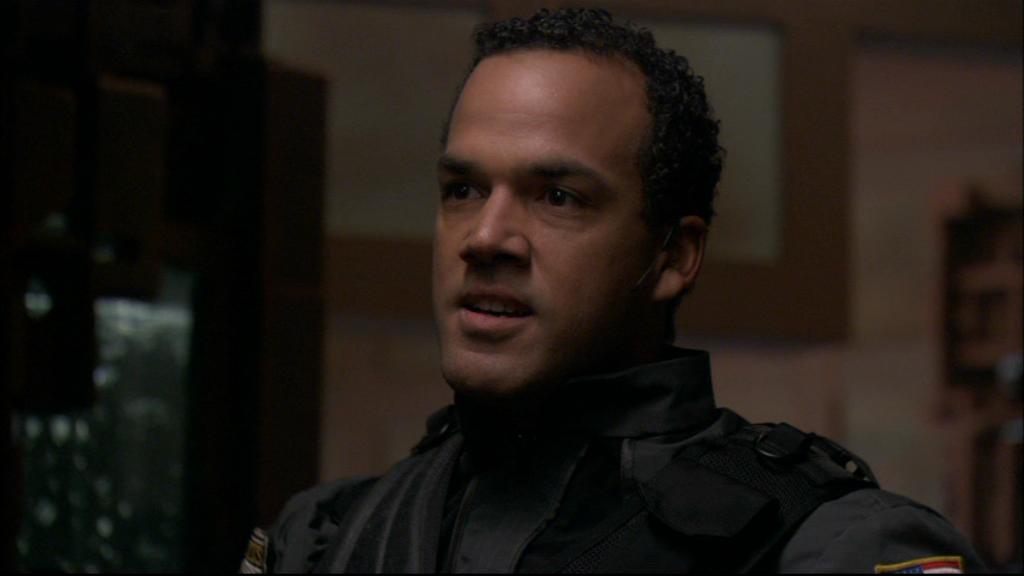 Sergeant in the U.S. military, assigned by Dr. Elizabeth Weir to be head of security on the Atlantis base. Bates traveled with the expedition to the Pegasus Galaxy, where his commanding officer was Colonel Marshall Sumner. Both men were among those captured by the Wraith, though Bates later escaped the hive ship prison thanks to Major Sheppard and Lieutenant Ford.

Bates is a by-the-book military man who has no qualms about standing up to authority and arguing for what he thinks is right. His job requires a certain level of caution and suspicion, something with which Bates does not have a problem. He kept a close eye on the Athosians when the refugees came to live on Atlantis, and was later quick to suggest that they be relocated to the newly discovered continent near the island city.

When a series of Wraith attacks occur on teams searching for a suitable world for an Alpha site, Bates suspects Teyla Emmagan to be the traitor, due to her mental link with the Wraith.

Bates was attacked and nearly killed by a Wraith infiltrator who he found tampering with a naquadah generator. After the siege of the city is lifted and contact with Earth re-established, he is sent back to Earth for treatment.

Due to his injuries Bates is honorably discharged from the army but finds new employment with the N.I.D.

Rising, Part 1 - Travelling to the Pegasus Galaxy, Bates is among those captured by the Wraith on Athos.
Rising, Part 2 - Major Sheppard leads a mission to free Bates and the others from the Wraith.
Suspicion - Now head of base security, Bates insists that the Athosians be questioned when Weir suspects a traitor. He also comes to believe that Teyla is working with the Wraith.
The Siege, Part 1 - Bates is nearly killed by a Wraith when the creature infiltrates Atlantis.
Outcast - Sheppard and Ronon meet Bates while dealing with a human-form Replicator on Earth.