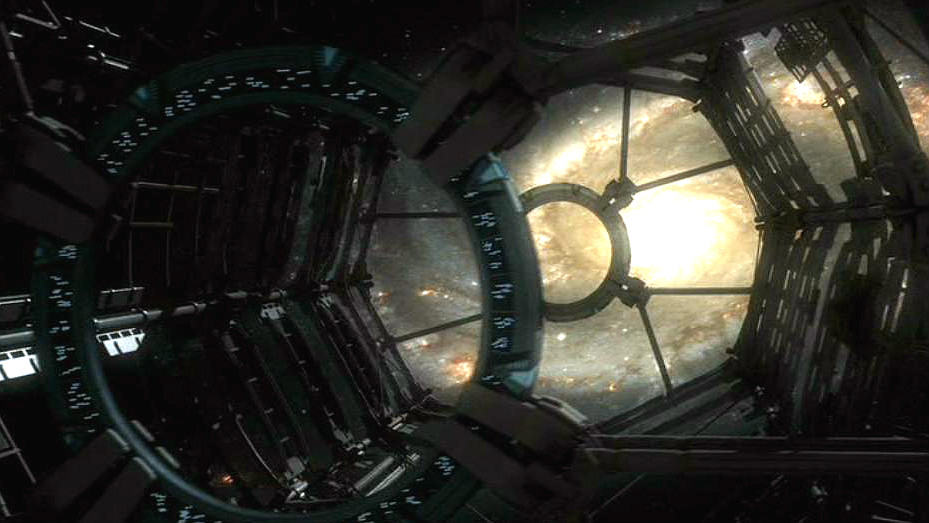 A collection of Stargates chained in relative proximity in order to span the 3-million-light-year void between the Milky Way Galaxy and Pegasus Galaxy, allowing time and power-efficient transport between Stargate Command and Atlantis. Seventy Stargates encompass the entire chain.

Conceived by Samantha Carter and developed with help from Rodney McKay and the Atlantis expedition, the bridge saves three weeks of hyperspace travel time. Thirty-four Stargates, each from the Pegasus and Milky Way gate systems are strategically placed in the void between the galaxies, meeting at the Midway Space Station.

A traveler may enter via Stargate Command or Atlantis and a macro written by Dr. McKay commands each individual gate in the chain to forward the energy pattern along the chain until reaching Midway. Once at this station, a traveler need only cross the room and enter the opposite Stargate network, where a similar macro process commences, until he or she is deposited at the opposite end of the chain.

Total travel time through the bridge is estimated at 30 minutes, excluding a mandatory quarantine period for travelers at Midway.

The bridge functioned for a little over a year before the Wraith gained access to the isolated gate system, penetrating the Midway station. This precipitated the station's destruction, leaving the gate bridge no longer functional.

Irresistible - McKay explains the idea behind the gate bridge as Sheppard's team searches Pegasus for space gates that can be harvested for the project.
The Return, Part 1 - Colonel Sheppard tests the intergalactic gate bridge via a Puddle Jumper, traveling from Atlantis to Stargate Command.
Midway - Ronon and Teal'c work together to repel a Wraith infiltration of the Midway station, which leads to the station's destruction and the end of the bridge project.
The Lost Tribe - After Atlantis' Stargate explodes, Daedalus retrieves on the derelict gates from the bridge to install in the city.