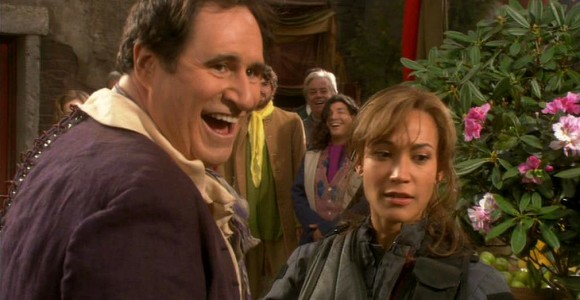 Sheppard's team meets an obnoxious man who is adored by all thanks to a secret that he carries – and who has an unexpected affect on them.

Lt. Colonel John Sheppard and his team are searching the Pegasus Galaxy for Stargates they can harvest. Since some planets are unoccupied, their gates serve no purpose. Dr. Rodney McKay and Colonel Samantha Carter devised a way to organize a Stargate string which would cross the void between Pegasus and Milky Way galaxies, which would reduce travel time on a Deep Space Carrier from three weeks to thirty minutes. McKay is ecstatic.

However, at one planet they detect life signs and decide to investigate. There, they find a happy community in thrall to a beatific smiling schmo, Lucius Lavin. With the demeanor of a snake oil salesman, the gregarious Lucius – with six buxom wives – is overbearing and friendly. He frantically offers to trade with the team. They beat a hasty retreat, with Sheppard in the throes of a nasty head cold. After a promise to return, Dr. Carson Beckett arrives later to discover what Lucius and his people might have to trade.

Dr. Beckett soon becomes enthralled with Lucius and his silly stories, so much so that Beckett returns to Atlantis with Lucius in tow. The man brings a prized gift of a candle stuck in a gourd, presenting it to Dr. Elizabeth Weir

The team has not discovered that Lucius is ingesting a mysterious, clear elixir in private. With this mixture his body emits pheromones which cause both men and women to take an interest in him to the point, ignoring their own self-interests. The Atlantis base is soon overcome to the excitement of giddy children in Lucius's presence. The man needs a re-supply of the herb he uses to make the elixir, and manipulates everyone into wanting to risk their lives with the Wraith to retrieve some. The only planet where it is grown naturally is currently occupied by a Wraith garrison.

Dr. Beckett, Teyla, and Ronon Dex make the raid on the planet retrieving several large bags filled with the herb. To Sheppard's horror, they seem to be laughingly oblivious to the terrible risk they just took. And so is everyone else. When Sheppard objects, Lucius merely has to comment that something is 'wrong' with Sheppard for the others to collectively stand against him. Even the impenetrable Ronon turns his gun on his commander.

Realizing he has to play along, Sheppard apologizes, admitting that he is tired. He picks his moment to return to Lucius's planet to uncover his secret. He meets Lucius's head wife, Willa, and discovers that she and the other are have fallen ill and are pining for the man's return – like drug addicts in withdrawal. Sheppard locates a small quantity of the potion and returns to the base.

Sheppard abducts Dr. Beckett in a Puddle Jumper, forcing him to quit Lucius cold turkey while instructing him to formulate an antidote. Soon he and Sheppard camp out on Lantea's mainland, awaiting capture. Soon enough, Teyla and Ronon arrive by Jumper to take everyone back to the city.

Believing that Dr. Beckett is going to give the A.T.A. therapy by inoculation, Lucius accepts the injection. Actually, he is given a dose of Beckett's antidote. Sheppard, who has mysteriously escaped, now sneaks Lucius in the Puddle Jumper and back to his planet so the rest of the base can begin their recovery.

Sheppard offers to return the hapless Lucius to his own planet, but not before everyone there gets the antidote. One thing is certain: When all is said and done, not many in the village will be happy with him.