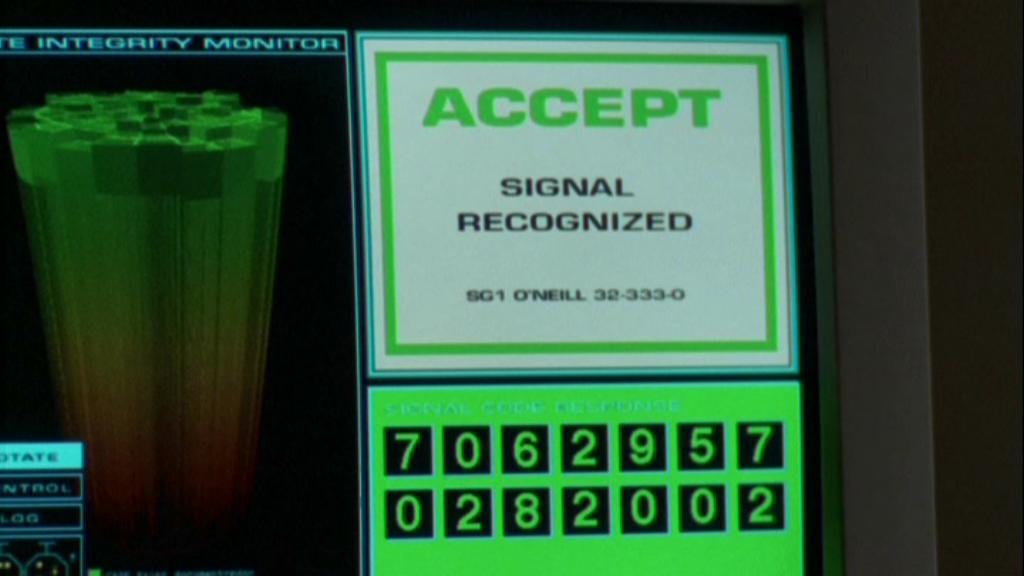 Code transmitted by an SG team member's G.D.O. Also called an "iris deactivation code" or "I.D.C.," the code is transmitted to the receiving base's computer (such as the S.G.C. or Atlantis), instructing the iris to open and granting safe passage back to Earth.

The code is a sequence of numbers that must be manually entered into the G.D.O. once a wormhole to Earth has been established. All SG units are assigned an individual I.D.C. number, as are Tok'ra operatives who work in conjunction with Stargate Command. Bra'tac also possesses a G.D.O. with codes assigned; his is Special Code Two.

If necessary, iris codes can be locked out from the main computer.

A Matter of Time - The gravity field of a black hole prevents SG-10's iris code from transmitting on a recognizable wavelength.
The Storm - A drunken Athosian gives up his I.D.C. code, inadvertantly allowing a Genii strike force to access Atlantis.
The Tower - Sheppard provides Eldrid's people with an I.D.C. so that they may contact Atlantis in the future, should they encounter trouble from the Wraith.
Midway - The S.G.C. iris is opened after receiving an automated I.D.C. transmitted from the Midway Space Station -- allowing the Wraith to penetrate the base.