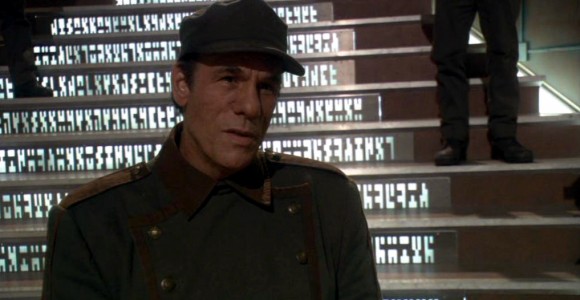 When a massive storm threatens the city, Atlantis is evacuated – only to be taken over by the team's newest enemy.

John Sheppard and Teyla have taken a Puddle Jumper on a course for the mainland. Cruising at a relatively high altitude, they encounter a storm front that stretches across the entire horizon. Sheppard takes the Jumper into space to better analyze the storm. Not only does it take up twenty percent of the planet's surface, but its heading for both the Athosian mainland and Atlantis.

Back at the city, Drs. Rodney McKay and Radek Zelenka discuss the problem. The weather pattern is actually two storms converging and combining power. Without the shield off, Atlantis is incredibly fragile. Winds will cause massive structural damage and flooding could sink the city. There is simply not enough power to activate it. In twelve hours the storm front will hit.

Elizabeth Weir instructs Sheppard to take Lt. Aiden Ford and find a world that will be willing to put up with a hundred squatters for two days. They travel to Manaria and grudgingly reach a tentative arrangement with Smeadon, insuring that their generosity will not be forgotten. After they depart, Smeadon takes a Genii communicator from a drawer and prepares to transmit a message to Cowen ("Underground").

McKay and Zelenka believe they have arrived at a plan, which they present to Weir. Atlantis has many lightning rods channeled into four grounding stations. Typically when lightening strikes the city it is channeled back into the ocean via the stations. If the rods are disabled the energy from the lightening could be channeled to generate the shield bubble. Several corridors are lined with a super-conductive material, indicating this to be the reason. Still, everyone would need to evacuate, as only the control room would be safe, but Atlantis would survive. Weir encourages them to double their efforts.

A man faces off, defenseless, against three Genii armed with staffs. One of them is Sora. Just as he finishes disabling her, the last to stand, he is stopped by a young soldier who identifies the remaining combatant as Commander Kolya. Cowen wishes to see him immediately. It is obvious that Cowen has been informed that Atlantis will soon be evacuated, and asks Kolya to ready his strike force to place the Genii flag in the city after it is emptied.

Back in the mainland, Teyla, Ford, and Dr. Beckett are awaiting the arrival of an Athosian hunting party. To go after them would be impossible. The storm will soon be upon them, but Ford decides to keep waiting.

With Atlantis evacuated (save for two soldiers and the command team), the Athosians have joined the humans on Manaria. Smeadon dines with one of the Athosians, getting him so drunk that Sora and Kolya enter and capture his I.D.C., eventually forcing him to agree to get them through the shield that protects Atlantis.

McKay delegates grounding stations to the three who remain. He will deactivate station one; Weir, station two; Sheppard, stations three and four. McKay and Weir are done before John reaches his first station. Rodney instructs him on how to disconnect the halves of the grounding rods. Sheppard is soon successful. Just then, the soldiers guarding the gate report to Weir that an incoming party from Manaria contains injured Athosians. With an Athosian I.D.C., they lower the shield. Soon Kolya and his men enter through the gate and kill both guards. Kolya orders the gate room secured. Soon he is introducing himself to Weir and McKay and tells them that he is now in control of Atlantis.

Sheppard, overhearing the entire conversation via active comm channels, hurries to the Jumper bay to communicate with Ford's team. He is surprised to learn that they are still in the mainland, but also frustrated that he's not going to receive backup. Still, he encourages them to stay put until the storm has passed.

Kolya's demands are simple. He wants all of the C-4, medical supplies, a Puddle Jumper and the Wraith data device and his team will leave without incident – or so he says. Sheppard, who has overheard this, immediately goes and hides the explosives. Meanwhile, McKay is left alone with Kolya, whose men holds the squeamish scientist captive with a knife.

Weir returns and finds McKay's arm bleeding heavily. He says he caved, but it is not clear what information he has given out. Meanwhile, the soldiers return with no C-4; only a walkie-talkie with Sheppard on the other end, saying Kolya will never locate the explosives. But Kolya is aware of the plan to save Atlantis. He tells Sheppard to uncouple the final grounding rod and make it so the shield will work, and Kolya will allow them to leave peacefully. "Atlantis will be ours ... or the ocean's," he says.

Weir attempts to dissuade Kolya from what he is doing, ensuring that the descendants of the Ancients are the ones who are meant to use Atlantis to destroy the Wraith, but Kolya is amazed by her arrogance, believing his people may be equally – or more – close to the ancestry of the Ancestors. He intends to use Atlantis himself to destroy the Wraith.

Sheppard arrives at the fourth grounding rod and uses an Ancient scanner to locate the two Genii soldiers in hiding, killing them and evening the score. But in the firefight one of the soldiers has destroyed the grounding controls. There is now no way to separate the rod, and Atlantis is doomed. Kolya is not finished, though. He tells Sheppard that he's going to shoot Dr. Weir. Sheppard warns that he will destroy the city if that happens, but Kolya knows that two command codes are required. As Sheppard begins to bargain, Kolya raises his weapon against her.