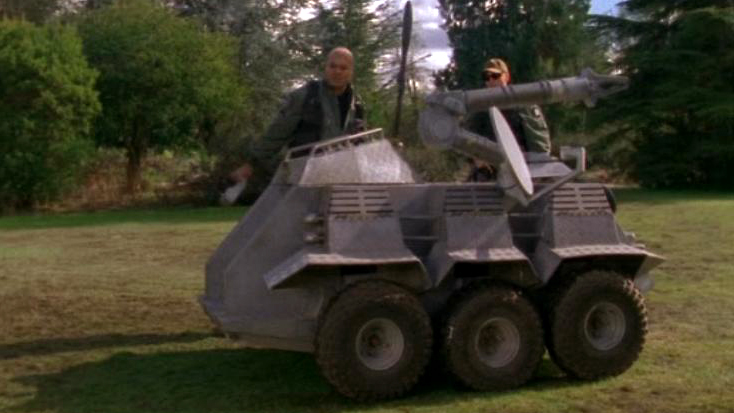 "Mobile Analytic Laboratory Probe." The M.A.L.P. is a remote-controlled exploratory device that is sent through a Stargate to see what is on the other side before a team from the S.G.C. or Atlantis is sent through. It is capable of detecting temperature, analyzing oxygen and transmitting video feeds, as well as visually confirming whether or not a D.H.D. is present so that a team can dial the Stargate back home.

M.A.L.P.s come in various configurations and equipment. For example, the original device used when the Earth gate was first activated ran on all-terrain treads, while the newer models used by Stargate Command run on six heavy-duty wheels.

Entity - A hostile alien entity hides in a M.A.L.P. to survive, while S.G.C. personnel attempt to wipe it from the main computer.
Urgo - SG-1 realizes that a destination planet is sending a false image back through the M.A.L.P.'s relay signal when the send a second device, and the first one is not seen anywhere near the gate.
Revisions - On an alien world where the atmosphere is toxic, SG-1 believes the M.A.L.P. has been stolen after the walls of the bio-dome shrink, leaving the probe now outside its walls.