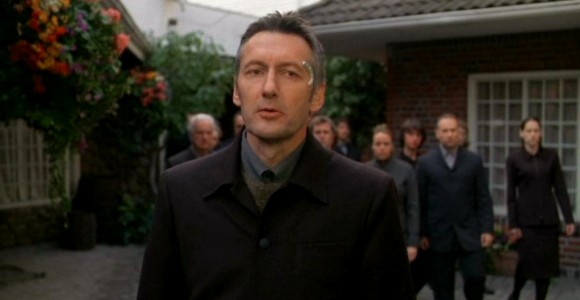 The team gates to a climate-controlled environment amidst a toxic wasteland, whose people are all linked to a central computer.

A M.A.L.P. returns information about an intriguing dome complex on P3X-289, a planet destroyed by toxic waste. As the robot explores the terrain its robotic arm disappears through some sort of energy barrier. Now, the M.A.L.P. shows a beautiful garden. Proceeding forward, transmission is suddenly cut. General Hammond orders SG-1 to retrieve it.

The team gates to the planet in hazmat suits and passes through the barrier into the garden, immediately finding the M.A.L.P. A young boy, calling himself Nevin, appears to SG-1. After a trade he agrees to lead the team to his town, where all the inhabitants appear to be wearing U-shaped devices on their left temple.

A meeting of the four council members is convened. The team describes the Stargate and how they arrived. The meeting stops while the council retrieves information about the Stargate from the Link, a computer which provides each individual with a library of knowledge. Major Samantha Carter is impressed with the sophistication and ease of the technology.

SG-1 is invited to stay the night so Carter can have a look at the technology in the morning. She and Daniel stay with the town computer expert, Pallan and his wife Evalla. They learn the few survivors have never been outside the dome in 400 years. Pallan explains how the computer maintains the town and the illusion of a normal world. Meanwhile, Colonel Jack O'Neill and Teal'c stay with Kendrick and Nevin. At dinner, Nevin grills O'Neill about his travels.

The following day Evalla takes Daniel to an old library which has actual books. While there Evalla blanks out for a moment, and soon Daniel becomes concerned with this repeating trend. While Sam is with Pallan in computer control, the same thing happens to him. At that moment, she notices that the screens on the computers have altered – and they soon change back. She tells Carter the readouts changed, but Pallan does not believe her. He assures her that the readouts always remain the same.

Carter suggests to O'Neill that the townspeople be offered relocation. They meet with the Council but only three of the four members are there. They refuse to accept relocation, convinced that the dome will protect them. O'Neill wants to know what the fourth member thinks, but the council denies there ever was one. Now things are getting weird. No one – not even Pallan – remembers a fourth council member. The team suspects foul play.

More unusual information surfaces. With Daniel, Evalla explains the population control policy, which is why she and her husband have no children. She tells him no one in the society has ever broken the rule. Back in the control room, Carter notices another drop in the power. The forcefield is in danger of failing. Again, Pallan disagrees with her.

On his way to check-in with the S.G.C., O'Neill is intercepted by Kendrick. The gardener wants a better future for his son than that the dome can provide. O'Neill agrees to take the pair back to Earth when they leave. But the M.A.L.P. is no where to be seen. Teal'c suspects a conspiracy to keep them from communicating with the S.G.C. Carter calls in to say the dome is losing power badly enough to fail in the near term. Now it is no longer an option, but a priority to move the people out.

The next computer update causes Evalla to leave Daniel's company. He follows her only to lose sight of her at an archway Daniel knows wasn't bricked up moments before.

SG-1 soon comes to the conclusion that the computer is brainwashing the dome's residents. They also understand that no one will believe them without solid proof. Daniel goes to look for old records in the library in the hopes of finding proof that there used to be at least one additional council member.

More weird inconsistencies confirm that the computer is messing with the people's memories. Nevin takes Teal'c and O'Neill home to a different house from the night before. Kendrick's father then denies he ever wanted to leave. Carter arrives back at the central computer to find that Pallan doesn't remember ever having a wife named Evalla.

O'Neill demands that the people remove the devices on their temples, which link them to the computer. Aghast, they refuse, now believing removal will kill them. This belief is in direct contradiction to demonstrations the day before, when Evalla removed her node for Carter to examine.

Daniel discovers proof that things used to be wildly different. Over 100,000 people used to live in the dome. He brings the paper proof to Sam and Pallan in the control room. She has enough information to draw a few conclusions. As the power level drops, the computer shrinks the dome and kills excess people by making them leave the protected area (Jack and Teal'c have confirmed human skeletons lie just outside the dome). To keep the people level-headed during this process, all memories of the people who departed are removed from their minds.

In desperation, Carter forcibly removes Pallan's link node. He is surprised that it isn't fatal. The computer, now desperate, reacts with another update when Pallan and Carter try to reprogram it. The rest of the townspeople receive new instructions: they are to put the devices on SG-1, whether they want them or not.

The townspeople corner O'Neill and Teal'c to force them to wear the nodes. SG-1 does not wish to harm anyone, but they refuse to allow themselves to be assimilated by the computer. He raises his weapon to ward off the advancing mob. In the nick of time, Carter and Pallan manage to initiate another update themselves.

The townspeople have no memory of SG-1, or what is happening to them.

As the team helps evacuate the citizens, Carter explains that the geo-thermal energy began to cool down 200 years earlier, causing the dome to shrink. Now Pallan has to make a new life without a wife he knows he had. He is in a particularly sad position, because he can't remember her to mourn.