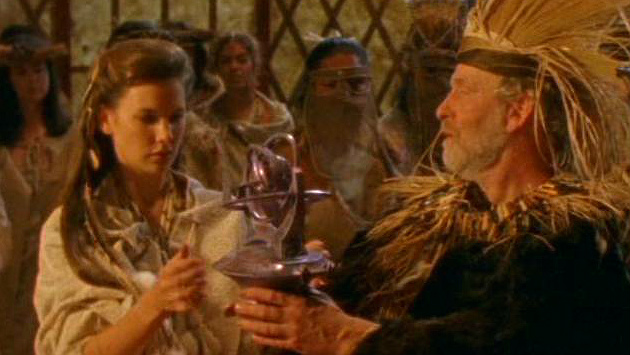 A relatively primitive, almost ethereal society who live in an environment of beauty and climate of thier choosing. Their religion and society is largely based around a piece of alien technology, possibly Ancient in origin, called the Touchstone, capable of altering their world's climate within moments.

The Madronans first made contact with Earth through the Rogue N.I.D. team who wished to study the Touchstone technology, eventually resorting to snatching the device from its owners without their knowledge. Following the loss of the Touchstone, the Madronans almost immediately faced drastic climate alterations. The skies above their planet went black with lightning and violent winds. Eventually an ice age began to take over the world, freezing the oceans and jeopardizing the safety of the Madronans.

Still, after SG-1 promised to recover the device, the Madronans decided that holding the team captive would not help in retrieving the Touchstone, and agreed to let them go in the chance that the team would keep their word in returning the device. Eventually they did succeed in retrieving the technology from the Rogue N.I.D. agents, and placed it back in the hands of the Madronans.

The Madronans' spiritual leaders are Roham and possibly his niece, Princess La Moor, who may also be responsible for governing the population.

Touchstone - Princess La Moor and Roham of the Madronans are shocked to see the return of those who stole the Touchstone, only to realize they are not the same unit.
Fallout - The S.G.C. attempts to resettle the Langarans to Madronas when their own world is threatened, but the deal falls through.