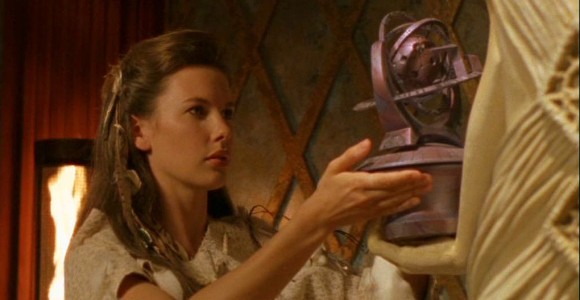 SG-1 is accused of stealing an important weather-controlling device, sending a primitive planet into chaos. The team discovers that Earth's second Stargate is being misused.

SG-1 arrives on the planet Madrona, where a less advanced culture possesses an advanced piece of technology left to protect their world from its tendency toward violent, inhabitable weather. The team reports to the S.G.C. about the device, and plans to return and study it. But upon their arrival back on Madrona, SG-1 learns that the device – called the "Touchstone" by the natives – has been stolen. Men dressed in S.G.C. uniforms came and went through the Stargate and took the device, leaving the peaceful planet at the mercy of terrible weather.

The team is stunned, and reports back to General Hammond about the incident. O'Neill considers the possibility that the general might know something about what is going on – but he does not. Carter checks the base computer mainframe, and determines that someone on Earth is using the second Stargate – discovered last year in Antarctica ("Solitudes") – to steal technology from other worlds, timing the journeys at the precise moment that the S.G.C. gate is being used, so as to mask their trails.

Hammond tries to contact the president, but cannot get ahold of him. He suspects that someone may be orchestrating the president's schedule to keep him away from Hammond. Meanwhile, Daniel has been paying attention to the weather reports, and found severe and unusual weather phenomenon in Arizona. Someone may indeed be experimenting with the Touchstone on Earth.

Carter tracks the gate to somewhere in Nevada, and Hammond reveals that old SG-1 opponent Colonel Maybourne recently got himself reassigned to Area 51, the Groom Lake Facility at Nellis in Arizona, where technology discovered by the SG teams is studied.

SG-1 follows up with a trip to Nellis, where they confront Maybourne. He appears to be oblivious to what they are talking about, and knows nothing of the Touchstone. He takes them to see the second Stargate, sealed up in a crate and kept under 24-hour-a-day guard. The team discovers that this gate is a plastic replica.

On Madrona, blizzards have begun to threaten the local village. To try and track the second gate, O'Neill and Jackson return to Madrona and send a M.A.L.P. probe back to Earth – overpowering the Stargate to cause the wormhole to jump to the second gate, instead of connecting back to the S.G.C. The people of Madrona are worried; they believe SG-1 is behind the theft, and doubt that the team will restore the Touchstone to them.

The plan works, though, and the M.A.L.P. arrives through the stolen Stargate on Earth. At the S.G.C., Carter uses the Global Positioning System to track the gate, while Hammond watches the video feedback. The probe is located in a darkened warehouse of some sort. A handgun appears, and a shot is fired – the transmission is lost. Carter managed to determine that the Stargate is somewhere in southern Utah, but did not have time to determine a more exact location.

Hammond calls in a favor: he visits with an old acquaintance named Whitlow, who knows nothing of the missing Stargate. But, he does know that a C5 airplane was ordered for a secret transport to an airfield in southern Utah, and it's certainly large enough to carry a Stargate. It is SG-1's next destination. But Hammond orders them not to open fire unless they have to, since they'll be going up against fellow Americans who may just be following orders.

At the landing strip, SG-1 finds a hanger bay with the stolen Stargate inside. They also find four men, presumably rogue operatives from the N.I.D. organization, and catch them off guard. The Touchstone is recovered, but the men dial the Stargate and leap through to escape to an unknown destination. The gate deactivates before Daniel can race to the D.H.D. and see the address symbols.

SG-1 returns the Touchstone to Madrona, where the device restores their planet's climate. The Madronans are thankful.

The second Stargate is recovered, and Hammond has it transferred to his command at the S.G.C. – though an unknown person in the government has removed the investigation from his hands. A permanent iris is welded over the second gate, and Colonel Maybourne hints ominously to O'Neill that "orders change ... property gets misplaced."