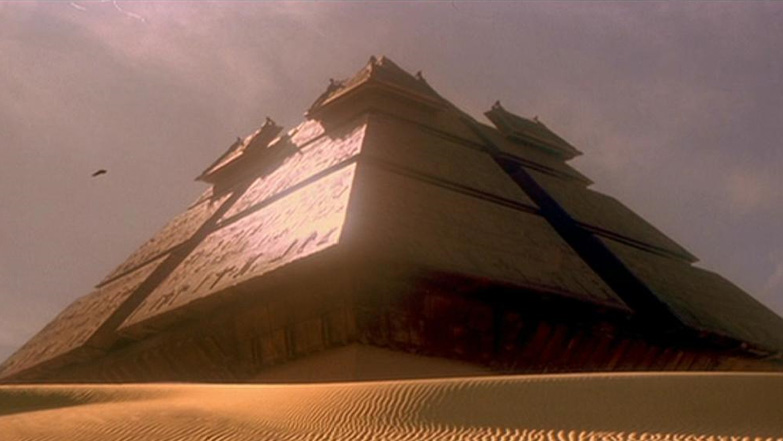 A pyramid ship in design, Ra's mothership posed a looming presence over the worlds under the domain of the Supreme System Lord. It created a massive wind storm in its wake.

Ra lived aboard his mothership and had designed for himself a bathing area as well as luxurious housing. Aboard the ship he carried his Jaffa, as well as several children to do his bidding -- as well as a number of cats, significant in Egyptian mythology.

Ra's vessel was destroyed just beyond the upper atmosphere of Abydos. Escaping an uprising by the Abydonians, the furious and short-sighted System Lord did not consider Jack O'Neill and Daniel Jackson using his ring transporter to send up a naquadah-enhanced nuclear warhead. Ra's mothership was obliterated, sending bright blue flares down to Abydos in the light of day.

"Stargate" the Movie - Ra travels to Abydos in his mothership, creating a sand storm that reaches out to the city of Nagada. After a revolt on the planet, Ra and his ship are destroyed in a massive explosion in orbit.