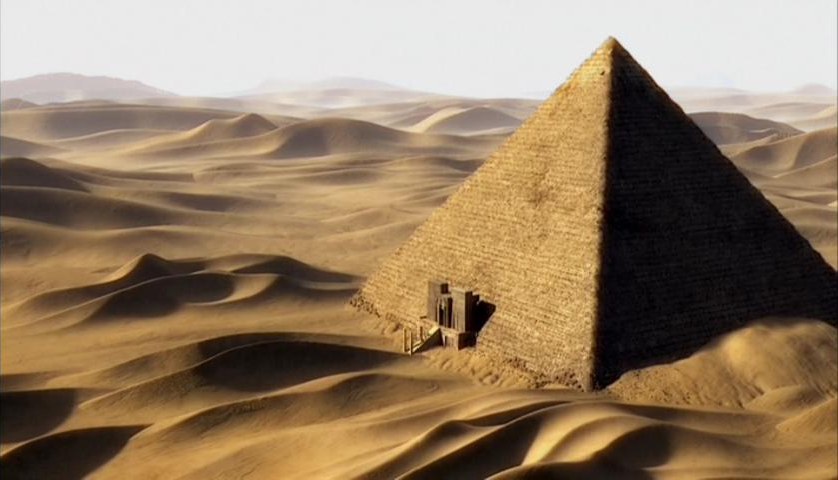 First world visited by the U.S. military when the Stargate was re-opened in the 1990s, and believed to be the closest to Earth in the vast Stargate network. The world is largely, or perhaps entirely, covered in desert. Most of the people live in the great city of Nagada, located several kilometers from the Stargate, or smaller satellite encampments.

Abydos was home to a thriving agrarian population of desert dwelling humans, abducted from Earth by Ra several thousand years ago. The planet was one of Ra's base of operations, where the population mined naquadah to quench his technological thirsts. After Earth's Stargate was buried, Ra, fearful of an uprising on Abydos, outlawed reading and writing.

The Abydonian leader is Kasuf. Abydos is orbited by three moons, which inform the Stargate symbol for their world. At least two non-human species are native to Abydos. The Mastidge looks like a combination of a buffalo and a horse, and possesses a keen sense of smell. The creature has been domesticated by the Abydonians. Abydos is also home to a relatively small, horned reptile, which the Abydonians use for nourishment.

The planet's population was ascended by the benevolent Oma Desala in order to save them from the attack of the Goa'uld Anubis, who otherwise wiped out the civilization and destroyed the planet.

"Stargate" the Movie - Colonel Jack O'Neill leads a pioneering team through the Stargate, and helps to liberate Abydos from the rule of the Goa'uld Ra.
Children Of The Gods - A year after Ra's destruction in orbit of Abydos, a new enemy, Apophis, arrives and abducts Sha're and Skaara, Kasuf's children.
Secrets - One Abydos year to the day, Daniel Jackson returns to the desert planet only to discover that Sha're has already returned, and is pregnant with the child of Apophis.
Forever In A Day - SG-1 responds to the latest Goa'uld threat on the world of Abydos, and finds that Apophis's queen, Amonet, has returned for Sha're's child.
Absolute Power - Kasuf summons SG-1 to Abydos to investigate a mysterious presence -- the arrival of Shifu, Sha're's ascended son.
Full Circle - Abydos, under the threat of the Goa'uld Anubis, is obliterated -- but not before the entire population ascends, with the help from Oma Desala.