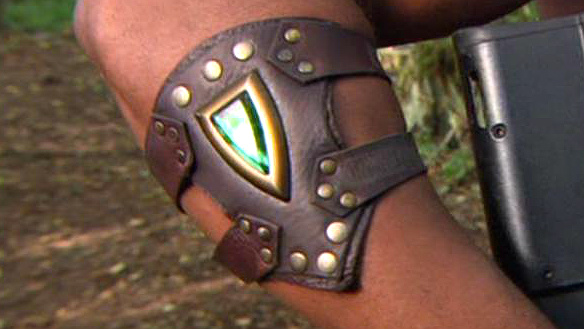 Triangular crystal worn about the arm of Sodan warriors, allowing a user to exist out of phase. Users collectively out of phase can see and interact with each other. If the wearer is armed with a weapon in phase, that weapon can be fired by them while at the same time harming those out of phase.

The technology creates dangerous radiation, for which a Jaffa's symbiote can safely compensate. Use of the device by others, however, can have long-term side-effects.

After Earth established relations with the Sodan, Stargate Command acquired the technology and began using it in the field on a limited basis -- adjusted to eliminate the radiation -- until it was determined that it had unforeseen consequences. Dangerous, extra-dimensional parasites, normally repelled by the radiation, were attracted and followed S.G.C. officers back into our dimension.

Arthur's Mantle - Teal'c discovers the cloaking device used by the Sodan to phase themselves, and takes one to track Volnek.
Uninvited - After the S.G.C. begins using Sodan cloaks in the field, they learn that it attracts extra-dimensional parasites which then follow the wearer back to our dimension.