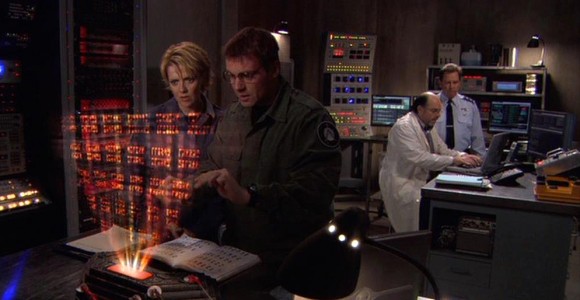 Mitchell and Carter are shifted to another dimension, making them invisible to everyone at the S.G.C. Meanwhile, Teal'c and SG-9 discover that the Sodan have been brutally attacked.

Lt. Colonel Samantha Carter is studying an Ancient device recovered from the Glastonbury cave ("Avalon, Part 2"). Cameron Mitchell suggests she needs a break and hashbrowns as its breakfast time. He also points out that as she and Dr. Bill Lee have been examining the device, with no breakthroughs, for six months, it's time to send it on to Area 51 and move on.

Carter suddenly finds a fluctuating EM output, indicating that the device is interactive. As she attempts to stabilize it, a flash of white light dissolves her and Mitchell. They can now see the device projecting a display – in Ancient.

Dr. Lee enters the lab and they attempt to show him the discovery. When he walks through Carter, she realizes they are out of phase, sent by the device into a parallel dimension within our universe. They need to find Daniel, who experienced a similar problem several years ago ("Crystal Skull"). His grandfather could see him because the older man had also visited the alternate dimension, indicating that Daniel may be the only one on the base who can see and hear them.

General Landry approaches Teal'c (who is fresh from a workout) looking for Mitchell and the rest of SG-1. SG-12 has returned from P8T-474, where the natives indicated the doomsday plan that the Ori Priors have been preaching about may be only days from implementation.

Carter and Mitchell find Daniel, who promptly walks through Mitchell indicating that they are not in the dimension he shifted to. He can't see or hear them at all.

An unauthorized off-world activation draws Landry and SG-1 to the gate control room. A garbled radio message, eventually cleaned up and understood to be a request from the Sodan for immediate assistance, is received. As Mitchell hasn't been located, Landry orders Teal'c to take SG-12 and investigate.

Jackson informs Landry that both Carter and Mitchell are apparently missing. A review of security camera tapes reveals that somehow Carter and Mitchell vanished from the lab, but the cameras in the corridor outside prove that they didn't leave through the door.

Teal'c and SG-12 find the Sodan village burning and bodies lying everywhere. Only their leader, Haikon, is barely alive. His symbiote dead, they administer tretonin to try and save his life. Haikon tells Teal'c that the murderer is Volnek, one of his own people. Elsewhere, Volnek attacks members of SG-12. Teal'c soon discovers that one of the control crystals has been removed from the "Eye of the Gods," making it impossible to return to the Stargate via the Ancient-designed transportation system. They are trapped on the planet, far away from the gate and any help.

Dr. Lee suggests the missing Colonels have been miniaturized. When they aren't found, he mentions traces of lepton radiation to Jackson. He recognizes it from his own experience with the crystal skull. Delving into various texts, Jackson concludes that Merlin built the device in question for use in another dimension. The lepton radiation means Carter and Mitchell are probably trapped in another dimension and invisible to anyone in the S.G.C. The invisible Mitchell cheers on Jackson for figuring it out.

Teal'c decides to hunt down Volnek while awaiting rescue. He takes one of the Sodan personal cloaking devices and sets off into the forest. As they missed their check in time, Landry orders Colonel Reynolds to prep an extraction team (SG-3 and SG-22).

Jackson surmises that the Ancient device Carter has been studying is actually a keyboard, its display visible only in the other dimension. Mitchell can interact with the device, and he pushes a button to get their attention, thereby establishing rudimentary communication. Only Sam and Cameron can see the display, written in Ancient, but only Daniel has the knowledge to translate it. Since no one knows what random activation of keys will do, Jackson decides they must describe the display one letter at a time using only "Yes" and "No."

Mitchell tells Carter he is going to accompany the extraction team, even though he is out of phase. He feels he may still be able to help. She protests, but he points out that Jackson was able to go off-world when he was out of phase. Mitchell is going to observe, and is effectively invincible, and he promises to come back when the team checks in.

Teal'c, using the Sodan cloak, locates the invisible Volnek, who attacks him. Volnek is growling and zombi-fied in appearance, obviously transformed from a man into some hyper-violent beast. Teal'c riddles him with bullets from his P-90, but it only temporarily stops Volnek.

Wounded, Teal'c retreats to the Sodan village. Haikon, now somewhat recovered, reveals that Volnek encountered a Prior while on a supply run to a neighboring planet. The Prior told him that the Sodan must be punished for their unforgivable treason against the Ori ("The Fourth Horseman, Part 2"). He exposed Volnek to a blast from his staff. A few days later, Volnek fell ill and soon became irrational and violent. He escaped slaughtered everyone – including his own brother, Jolan.

Reynolds, the extraction team, and out of phase Mitchell arrive on the Sodan homeworld. Teal'c advises that the only sure way to kill Volnek will be to destroy his body. They decide to use a claymore blast with Teal'c as bait.

Dr. Lee continues to work on the Ancient device, and inadvertently sends Jackson out of phase. But Daniel can now read the display in the parallel dimension. He discovers that Merlin created this device to hide the weapon he was working on – a device to kill ascended beings. Merlin felt the Ori were a threat, so he completed the weapon and moved it off-world. The Stargate address to the planet is recorded on the display.

Lee accidentally drains most of the power from the device. But Jackson determines the key combination that will return them to their own dimension.

Pursuing Volnek, Teal'c activates the Sodan cloaking device and can suddenly see and hear the out of phase Colonel Mitchell. Because he can't be hurt, they decide that Mitchell will be the one to lure Volnek into the claymore trap. Volnek pursues his old enemy relentlessly, and is surprised when he shoots Mitchell dead-on with no effect.

But when Jackson keys the device on Earth, Mitchell is also affected. He is no longer out of phase, and can no longer see or hear Volnek – who attacks him. Teal'c steps in and saves Mitchell as Volnek rushes into the claymore trip wire, where he is blown up.

Mitchell produces the transporter system's missing control crystal as he and Teal'c head back to the village and, hopefully, home in time for dinner.