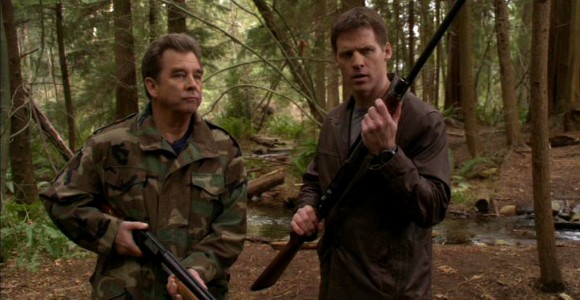 Teal'c discovers a world where people are being savagely attacked by an elusive creature, leading SG-1 to a stunning discovery about its potential origin.

General Hank Landry has ordered SG-1 and Vala Mal Doran to join him at General O'Neill's cabin so they get to know one another better – and to take a break from the constant pressure of the Ori. Driving his vintage black Mustang, Colonel Mitchell is the first to arrive despite getting lost.

The others have been delayed. Teal'c is off-world assisting SG-3. Colonel Carter, in command of the S.G.C., can't join them until Teal'c and Colonel Reynolds return. Vala will travel with them. Dr. Daniel Jackson, in England, has found a private book collection concerning Merlin and Morgan. Mitchell makes his first stuck-alone-with-your-boss faux pas – When he remarks that Jackson is like a fat kid in a candy store, Landry reveals he was a big boy in his youth.

They are not alone, however. An unseen observer is watching, using a cloaking field SG-1 has encountered before ...

On P9J-333, Teal'c observes the brutality of whatever has ripped villagers apart. Back at the S.G.C., the two men, Carter and Vala discuss the possibility that this creature is Ori-related. Vala volunteers her extensive experience hunting rare, deadly creatures. If her help isn't wanted, she'll devise activities for quality time at the cabin.

Carter sends Teal'c, Vala, Reynolds and SG-3 and 25 back to P9J-333. Vala is thrilled; Teal'c is not, especially when Vala tries to negotiate splitting the money if they sell the captured creature. On the planet, there is another attack. Vala runs to the D.H.D. to summon help. The creature and Teal'c follow. Teal'c uses a grenade to kill it.

During a raging storm, Mitchell loses his third chess game to Landry before admitting that he hates it. Landry has been pondering Mitchell's comments about not being in charge ("Insiders"). After Mitchell says he's used to a clearer chain of command, Landry points out that Mitchell made it his personal mission to bring SG-1 back together. Mitchell admits he wouldn't change anything, that he has learned he needs the rest of SG-1. Landry expresses his assurance in Mitchell, but adds that winning will require them to work together. Mitchell's job is to see that that happens.

As Cam prepares for bed, the power fails. Hearing a noise, he grabs a pistol. In the process of investigating he nearly shoots Landry, armed with a shotgun, as they round the same corner from opposite directions. They agree to try not to shoot one another before morning before finally turning in.

Next morning, with the power and phones still out, Mitchell prepares to leave, but the road is washed out. The colonel is horrified by the prospect of another day alone with Landry. Back at Stargate Command, Carter is wide-eyed when Vala, who has used the Goa'uld healing device on the wounded of SG-25, actually sits in Landry's chair. But she draws the line when Vala attempts to put her feet on his desk.

Dr. Redon performs an autopsy on the P9J-333 creature. A black worm-like animal emerges. Teal'c zats it before it can attack the doctor.

Encountering a wild-eyed hunter, Mitchell helps locate the man's friend, now dismembered like the people on P9J-333. Fearing an alien creature is loose, Mitchell and Landry set out to track it down. While they search, Landry reveals he was shot down and hunted by Viet Cong. Mitchell says he finds work relaxing – that he's twisted that way.

Soon another mutilated hunter is discovered.

When another team returns with injuries, Carter concludes that the worms aren't an Ori creation, as they only appear on worlds where S.G. teams have disguised themselves using the Sodan cloaking devices ("Babylon"). In addition, one device is missing from Area 51. Agent Barrett, who has recently recovered from his brainwashing ("Insiders"), is investigating.

Carter and Teal'c test the Sodan devices, hoping to attract the creatures. Emitting radiation, a worm transforms a docile host into a vicious mutant. When Teal'c has been cloaked for a short while, a worm appears. The device's own radiation has provided an inter-dimensional bridge.

Mitchell follows a trail of blood to an invisible something. He orders that the cloaking device be turned off. The man using the device, a Trust agent who has been observing the cabin, has been shot. Carter surmises something worse than a bear is in the woods.

Landry commandeers the hunt in the name of national security. A skeptical Sheriff Stokes, who is assured by Landry that everything is fine, is mauled by a massive four-legged monster and dragged off.

Carter hands out devices to SG personnel to track the creature. After nightfall the team locates the area of the woods it has been detected, but can't see it. It materializes several times before they kill it. To everyone's shock (minus Vala), a second creature appears and is quickly dispatched.

The next day Teal'c, Vala, Carter, and Mitchell play poker in O'Neill's cabin. Carter admits that she is not a gambler, but Teal'c agrees, evoking her competitiveness. The others drop out. Teal'c eventually folds, much to Carter's delight. Mitchell commits his final faux pas by laughing about Landry thinking the second creature's attack was a joke. Pleased to see them relaxing, Landry joins the game.