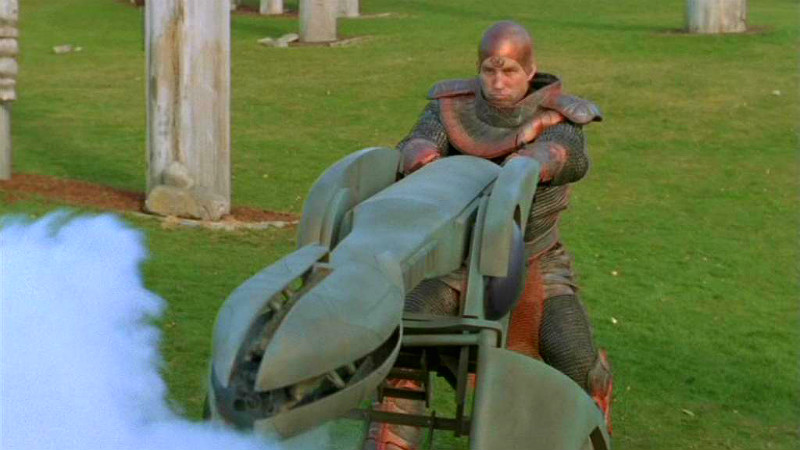 Stationary field weapon used by the Jaffa for large-scale combat operations. The staff cannon is a larger and more powerful version of the staff weapon and death glider cannon technology, delivering a powerful blast of charged plasma at its target. It appears to be approximately the same size and yield as the cannon tower.

Like the staff weapon, the head of the cannon is enclosed in a four-part casing. The four segments open with a crackle of energy when the device is made ready to fire. Also like the staff weapon it is likely that its power source is liquid naquadah.

The cannon is mounted on a large tripod base, which stabilizes the weapon during operation and allows it to be turned 360 degrees for target acquisition. The canon also pivots up and down for maximum range of movement. It can be deployed into the field of combat relatively quickly, and is operated by a single Jaffa using two handles.

There But For the Grace of God - In a parallel reality, Teal'c uses a staff cannon erected inside the S.G.c. during an invasion to shoot Jack O'Neill dead.
Forever In a Day - Jaffa in the service of Amonet use a staff cannon to try and hold off SG-1.
Upgrades - Jaffa fail to stop an enhanced SG-1 team from attacking Apophis's new mothership construction facility.
The Other Guys - Teal'c seizes a staff cannon to help SG-1 escape a forest of Jaffa.