Forever In a Day 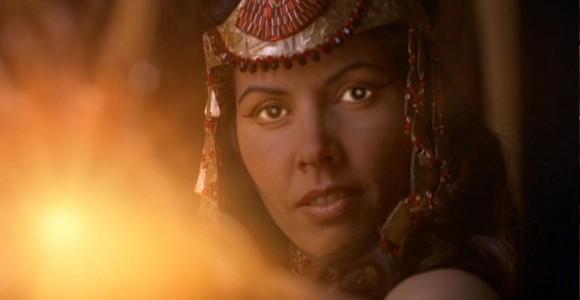 Jackson deals with the apparent death of his wife, Sha're, at the hands of Teal'c.

When SG-1 arrives on a world to free a group of captured Abydonians, including Kasuf. They quickly discover that the Abydonians' captor is the Goa'uld Amonet – bride of Apophis, who has possessed the body of Daniel's wife, Sha're. While SG-1 frees the Abydonians and battles the Jaffa forces, Daniel pursues Amonet into her tent. He tries to speak with his wife, but quickly finds himself on his knees at the receiving end of a Goa'uld hand device.

Teal'c appears and, seeing the mortal danger Daniel is in, fires his staff weapon, killing Amonet and Sha're. The group returns to Earth, and Daniel is in sorrow. He does not speak to Teal'c. At first, Daniel refuses to believe that Sha're is truly dead – until Colonel O'Neill brings him to the morgue and shows him her body. There were no Jaffa remaining to take her to a sarcophagus, they tell Jackson.

When Daniel next awakens, Sha're is at his side. The Goa'uld parasite within her is gone, and she has been restored to him! Daniel wonders which reality he has now experienced is the truth. As he moves back and forth, being assured that she is dead and then seeing her alive, real, Daniel slowly hears the message that Sha're is telling him: "You must forgive Teal'c."

Daniel finally acknowledges that she is dead, but struggles with the fact that he must forgive Teal'c – and that he must find Amonet's son, the son of Apophis. The child is aHarcesis, the offspring of a forbidden Goa'uld union, who carries all the knowledge and secrets of the Goa'uld.

Finally, Daniel and his team return to Abydos to bury Sha're. He resigns from the S.G.C., since his reason for being a part of it is over. But when Sha're returns to him in his sleep, Daniel gets an idea: he rejoins the team and embarks on a mission with SG-1. After arriving on a new alien world, Daniel darts off and through the Stargate. He returns to the planet where Sha're was found, to the tent where she was killed. Through his visions of her, this is where Sha're has been telling him to go.

She is there, waiting for him. Jackson comes to realize that he must forgive Teal'c for what he has done, and that he has a new mission – find the boy. Soon we see that, in fact, no time has passed at all. Daniel is still kneeling before Amonet, as Teal'c fires his staff weapon to kill her.

Broken free of the hand device, Daniel collapses next to Sha're's body and tells Teal'c, "You did the right thing." He is convinced that Sha're communicated with him through the hand device, asking that he promise to find her son – and to say goodbye.